Are you one of the millions of viewers who watches the highly-addictive HGTV home re-modeling show Fixer Upper? If you answered “yes,” then you’re in good company because we are huge fans of the show, too!

Now, we absolutely love to watch the homes transform, but we think you’d agree that the real “heart” of the show is Chip and Joanna Gaines’ relationship.

The talented husband and wife have been together for over 15 years now, quite the feat considering they have been working side-by-side since their first house flip back in 2003. Since then, Chip and Joanna opened Waco’s hugely popular Magnolia Market, starred in one of the highest-rated shows on television, and had four beautiful children together.

Twelve-year-old Drake, 9-year-old Ella Rose, 8-year-old Duke, and 7-year-old Emmie Kay have been Chip and Joanna’s prized accomplishments, but as you may have heard, it looks like their large family is set to get even bigger… 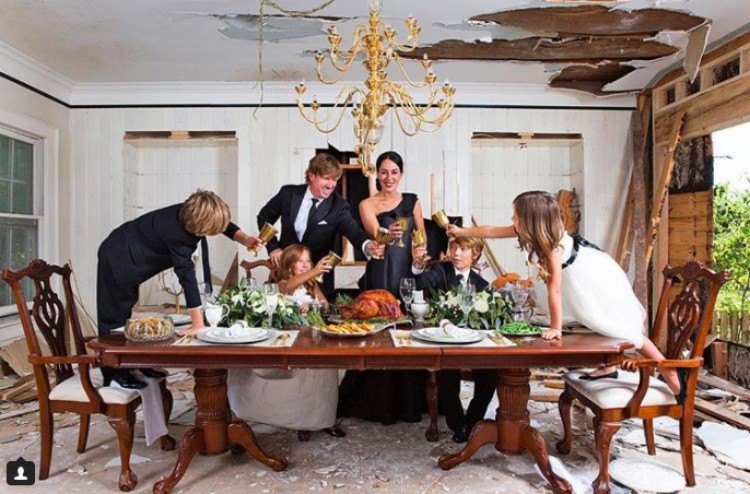 When the Gaines’ announced that this season of Fixer Upper would be their last, many fans wondered why the stars would decide to pull the plug on a show that had done so much for their careers, but an Instagram post that was published the night of their show’s last premier seemed to answer this question.

The message, which was posted to Chip’s account, was a simple one. “Gaines party of 7,” he wrote. “(If you’re still confused, WE ARE PREGNANT).”

Doesn’t get much clearer than that, huh? Of course, Chip included a hilarious picture to punctuate the post, something that, if you are a fan of the show, will not surprise you in the least bit!

For those of you who have been closely following the couple’s journey, the news answers quite a few unanswered questions. Back in October, PEOPLE published a cover story featuring the duo’s announcement stating that they were leaving Fixer Upper.

In the interview, Chip and Joanna cite their desire to “take a step back” as one of the reasons for their decision, but the biggest had to do with their family.

“I realized the show was demanding time from me, and I needed to be giving it to our businesses, to our relationship, and my family,” Chip explained. “How far can you push it before something really does break down? And that’s kind of where we landed.”

All we can say is: WOW. It’s not every day that you see a couple walk away from a hugely popular TV show. We will miss them dearly, but something tells us Chip and Joanna Gaines won’t stay completely out of the public eye.

To see the hilarious pregnancy announcement photo that is taking the Internet by storm, be sure to watch the video below. This little boy or girl is going to have a pretty awesome nursery!

We’d love to hear your thoughts on this exciting Fixer Upper news! Are you a fan of the show? If so, are you surprised that Chip and Joanna decided to have a fifth child? What is your favorite home renovation show?