All of you mommas out there know all too well just how important it can be to get great maternity photos taken during pregnancy. Even if you’re camera shy, you gotta capture that special time!

That’s why one Illinois mom-to-be hired a pro photographer to document her growing baby bump. And, while the end results are breathtaking, one hilarious shot has managed to completely upstage the others. Spoiler alert: It has nothing to do with her stomach!

When Kansas City expectant mom Laura Morgan decided to get her beautiful belly photographed, we’re assuming that she was not expecting one of the shots to go viral. After all, maternity photos are usually just reserved for friends and family, right?

Well, when her photographer, Ashley Hempel, posted one hilarious candid, Laura’s private shoot ended up being exposed to the world!

But, before we get into the nitty-gritty of how one ordinary couple became viral sensations, let’s first back up and revisit the day when the infamous shot was captured… 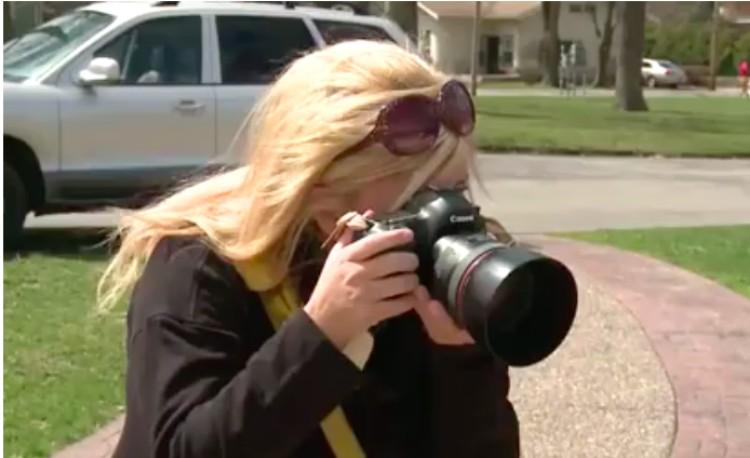 Laura’s hubby Aaron had accompanied his wife to a local park where the maternity shoot was taking place. While the photographer was busy snapping away, Aaron had a stroke of genius. He looked down at his self-proclaimed “beer belly” and instantly came up with a seriously silly idea.

The funny dad-to-be crept up behind his posing wife and, unbeknownst to her, began displaying his belly to the camera. He was completely outshining Laura without her even knowing it!

Of course, the photographer started cracking up. I mean, could you imagine trying to capture a precious moment with that going on in the background? We don’t blame her for laughing one bit!

The good-natured couple loved the shot so much that they agreed to let Ashley add it to her photography Facebook page. Incredibly, the silliness garnered an impressive 80,000 ‘likes’ shortly after it was posted.

So, what was going through the expectant dad’s head when he snuck up behind his wife and executed the epic photobomb? Well, the bashful viral star claims that the pose wasn’t that big of a deal. In an interview with local news outlet WQAD, Aaron said, “I probably did what most guys that have a beer belly would do.”

In her interview, Ashley explained that instances like Aaron’s ‘signature posing’ are part of what makes her so passionate about her work in the first place. “To capture something like that… you’re going to have that forever, and you’re always going to look back at that picture and have that moment,” gushed the photographer.

Now, we know you’re surely chomping at the bit to see this outrageous maternity photo. To take a look at it for yourself, as well as meet the photographer behind the iconic shot, be sure to check out the video below. We’ll never look at maternity shoots the same way again!

What do you think about this daddy-to-be stealing his wife’s thunder? Have you ever been part of a creative maternity shoot? Has one of your family photos ever gone viral? Tell us all about your thoughts and experiences in the comments section below!