Fostering a neglected, abused, or unwanted dog is a tough job. These types of pooches usually face quite the uphill battle toward recovery. So, naturally, we’re always rooting for these special pups and the parents that take care of them.

That’s why, today, we are going to introduce you to one of our favorite rescue animals, Grayce the pit bull. She’s a big, beautiful girl who just loves her new owner, Stevoni.  Grayce has recently become a mom herself, having given birth to an impressive litter of 11 PUPPIES!

One evening, as Stevoni was watching over Grayce and the puppies, something truly out of the ordinary happened. As Stevoni sat at one end of the room, observing, Grayce began handing the puppies off to her foster mommy one-by-one. It’s rather clear that the dog wasn’t merely giving her rescuer the puppies; it seems as if she just wanted a bit of attention for herself. 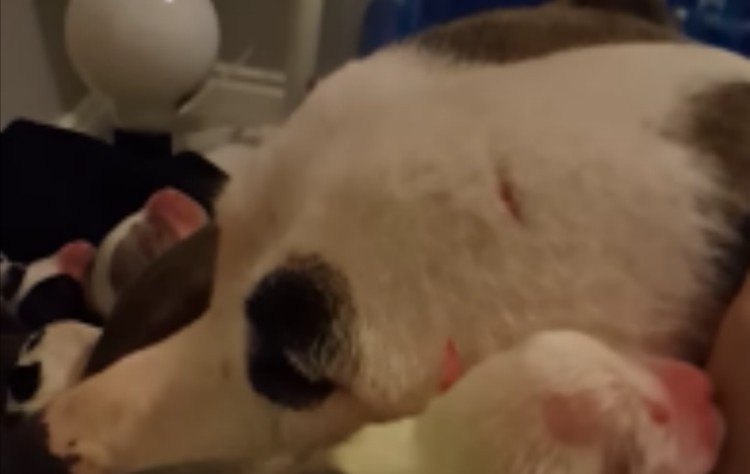 Luckily for us, Stevoni had a friend with her to record this amazing sight. She kicks off the video by explaining why she’s got so many little canines crawling all over her. “This is Grayce,” Stevoni says, as she nods over to her rescue dog. “She’s brought me every single one of her puppies.” And Stevoni isn’t exaggerating— the new mother brings all eleven of the yelping puppies.

Now, at this point, these tiny pit bulls are only a couple of weeks old, and basically the size of guinea pigs. Nonetheless, the foster mom is practically buried up to her neck in them. Hey, we don’t think we would be complaining—they’re so darn cute!

Now, we know that you’re probably thinking there must be something wrong with either mom or puppies for her to be handing them off to Stevoni in this way. It’s pretty well-known that female dogs become quite protective of their young, but, in reality, everybody seems to be thriving. In the video’s description, Stevoni writes:

My sweet foster dog Grayce came to me three weeks ago. She was ready to find a safe place to have her pups. She found me. I’d say by this video she feels somewhat safe. I sure love her.

We agree! It’s pretty obvious that this sensitive pit really trusts the humans around her. Towards the end of the video, Stevoni’s friend makes an astute observation that perfectly sums up this unusual situation. He says, “She just wants love, but she won’t leave them alone.”

Exactly! It looks as though Grayce just needs a little bit of affection herself. We certainly can’t blame her on that one. Giving birth to and nursing eleven puppies must take a lot out of you.

Well, we could jabber on about this unexpected sight all day, but we really think it’s best that you check it out for yourself. Click on Stevoni Doyle’s video below to meet Grayce and all eleven of her pride and joys. Let’s just say that this video gives the term “dog pile” a whole new meaning!

What do you think of Grayce’s behavior? Have you ever witnessed a dog sharing her puppies with humans before? Tell us all about your thoughts and experiences in the comments section below!