Former Rocker Gets a Much-Needed Makeover Right Before His Wedding

Much like music, television, and fashion choices, hairstyles are something that can seriously change from decade to decade. After all, who can’t look at short, blunt bobs without envisioning the flappers of the 1920’s? What do we think of when we see long locks and Beatles-style bowls besides the Psychedelic 60’s?

But those iconic hairstyles of decades past don’t necessarily STAY as trendy as they once were. Nothing proves that statement more than people who are still rocking their outdated ‘do and maybe finding that it’s not quite as flattering on them as they once thought it was.

Dan is a big-hearted guy who is about to marry the love of his life in a few short weeks! However, his bride-to-be wanted to bring her fiance into the present day before their big day — primarily by offering him up for an epic hair makeover on the Rachel Ray Show.

Now, Dan was a rock n’ roll guy back in the 1980’s, and his hair definitely screams that loud and clear. It’s long, it’s fluffy — in Rachel’s words, “it’s a mullet gone wild.”

This might have been a hot style once upon a time, but nowadays it looks more like Dan is living in the past rather than embracing his exciting future! When asked why he never updated his look, the former rocker responded:

“I just never liked the shape of my head,” Dan confessed. “And I’ve never had a short haircut that I liked.” 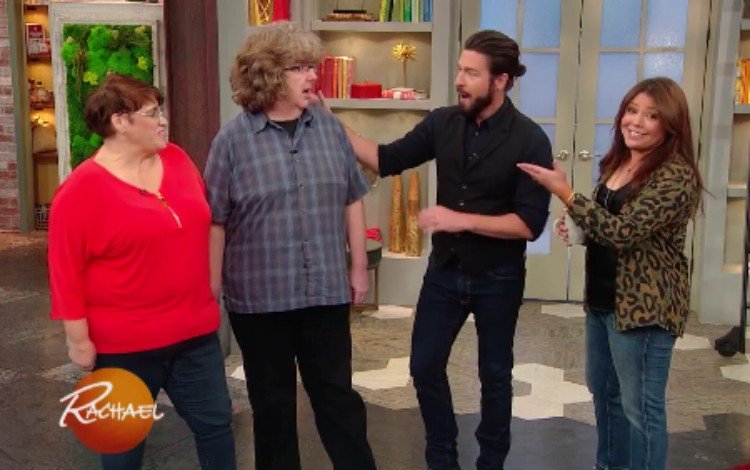 Fair enough! But Rachel’s makeover stylist was confident that Dan’s thick, healthy hair would lend itself to a wonderful new ‘do.

Sometime later, Rachel and Dan’s fiance eagerly await the future groom’s big entrance. As it would turn out, Dan was pretty stoked about his entrance, too! From backstage, he announced that he “loved” his new haircut and that he was coming out to reveal it before Rachel’s cue!

Hey, rocking a fresh new hairstyle will give you that kind of confidence.

And we definitely see where all that confidence came from! Dan strutted out onto the set with a short, volumized style that’s flattering to his face shape and in line with today’s trends. Rachel put it perfectly saying his new style is “rock n’ roll updated,” which is completely true; he looks as handsome, confident, and stylish as any rock star today!

Best of all, his fiance was rendered “completely speechless,” and couldn’t believe that she could finally see, “his beautiful eyes.” How sweet!

The stylist that brought Dan’s amazing new look into the present day reminds all guys that the key to reclaiming your hair is structure.

“What I want you guys to remember is structure,” He said. “If you’re a guy and you’ve let your look go, the thing to come back to is structure. It will bring your whole look together. What I mean by structure is lines; you can sort of see it has a strong line here and a strong line in the back, which gives plenty of room for the coif up top.”

Gentlemen who want to update their look, take note!