Summertime is the best time! Especially if you have kids, there are so many fun things to do as a family. You could go to the beach, go to the zoo, eat outside at restaurants—the options are endless.

Of course, if you’re just looking for something low-key to do at home, don’t forget about one of the most fun, cheapest, easiest, and convenient activities of all: Running through a hose in the backyard! If you’ve ever played with a hose when you were younger, you know what we’re talking about—and how much joy it could bring.

But before you spray some water on a hot summer day, note this very important warning from the Las Vegas Fire Department, who brought this thought to the public’s attention: It’s extremely important that you let your hose run for a bit onto the grass before spraying it on a child, especially if it was sitting in the scalding hot sun all day.

The tweet from the Las Vegas Fire Department stated: “Here in Las Vegas, a garden hose exposed to direct sunlight during summer can heat the water inside the hose (not flowing) to 130-140 degrees which can cause burns especially to children & animals. Let the water flow a few minutes to cool before spraying on people or animals.” 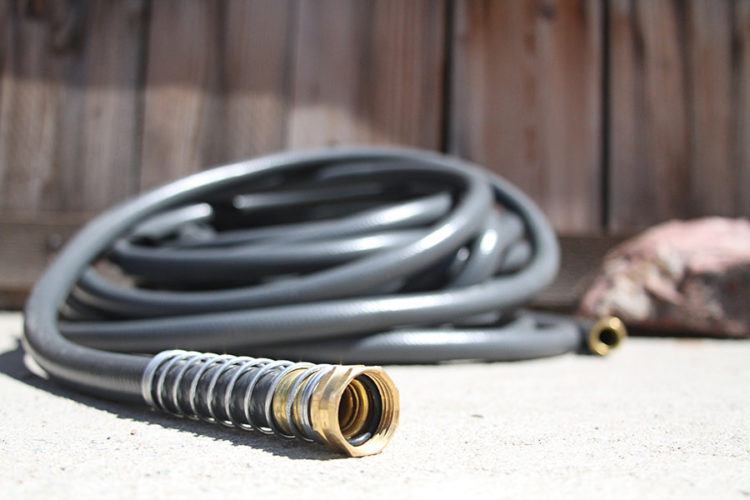 The tweet included a photo of a 9-month-old boy from Arizona who was accidentally burned by scalding water from a hose back in 2016. In this case, his mother was filling up his kiddie pool with a garden hose after it was in the sun. She didn’t have any idea it could cause such bad burns.

“It doesn’t reach boiling, but it does get almost there. It’s about as hot as coffee coming out of the pot,” says Dr. Kevin Foster, Director of the Arizona Burn Center in Phoenix. “A burn happens almost instantaneously at that temperature.”

The boy in the photo received second-degree burns to about one-third of his body, but thankfully, he was okay and has since recovered. But firefighters this year are determined to not repeat what happened to this poor boy ever again.

Even if you don’t live in Las Vegas, or somewhere where it can get to well over 100 degrees, it doesn’t hurt to let the water from a hose seep out before using it in a way that’s going to touch human skin, especially a child’s. Kids have thinner skin than adults do, so their burns can be deeper.

Honestly, for that matter, it doesn’t hurt to keep the hose inside during the summer, or at least in a spot where there’s shade that can cover it.

In times when temperatures get sky high, even the sidewalks and car doors can burn to the touch. If you ever find yourself in a situation where your child (or you) have been badly burned, use cool water (not ice), which will help soothe the pain and limit the extent of the burn.

Have you ever made the mistake of letting the hose run after it was sitting in the run and noticed the water was hot? What will you do this summer to ensure that this doesn’t happen?