“The Star-Spangled Banner”: It’s a song that’s synonymous with patriotism, fireworks, and, of course, sporting events. We have to admit that we are not the biggest sports fans in the world (though we do love ourselves some Olympics ice skating!), so suffice it to say, our favorite part of the game actually happens before the players come out—when the singer steps up to the mic to perform the national anthem. Talk about magical!

Now, we’re not too picky when it comes to singers or style; recently, we told you all about the beloved “Anthem Painter,” an artist who paints, while he sings the anthem in front of sold-out stadiums across the country.

In that post, we gushed about how refreshing it was to see a different take on the song, not knowing that just days later, we would be graced with yet another really, REALLY different rendition of our national anthem. Yep, we can practically hear all of you basketball fans snickering from the other side of the screen…

This past Sunday, the NBA’s best and brightest were gearing up to take the court for the annual All-Star Game, but before they would shoot those hoops, Fergie came out for the requisite national anthem performance—and boy, did jaws drop.

You see, from the very first note, it was clear the Black Eyed Peas frontwoman was out of her wheelhouse. The 42-year-old singer, who is known for busting out the high notes for dance tracks, opted for a jazzy—and we mean REALLY jazzy—accompaniment. It was a new take on an old classic and one that, unfortunately for Fergie, no one was having…

Let’s start with the folks who were there to see the whole thing go down live—the crowd and the players. We can’t say whether or not this was accidental, but it seemed as if the director of the televised game focused his efforts on nabbing shots of folks either laughing at or looking on in horror while Fergie belted out her 2-minute rendition. 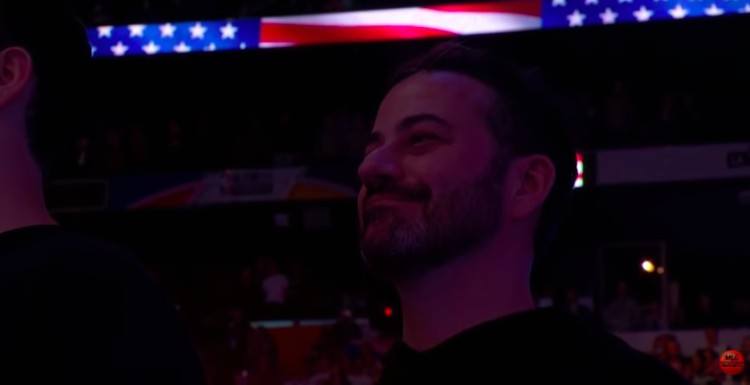 Yikes. Who smiles during the national anthem, anyway? Someone who’s watching Fergie’s performance of the song, apparently!

And, perhaps unsurprisingly, the “Twitterverse” had a lot to say about the singer’s performance. Khloe Kardashian released a simple: “This All-Star opening is confusing to me. WTF is going on? Anyone?” Pret-ty passive aggressive.

Singer K.D. Lang called to do away with national anthems in general. “Would it be so bad if we just dropped the national anthem altogether from sports events?” she tweeted. Wow, you know your rendition is bad when folks are suggesting a retirement of the entire tradition.

It goes without saying that similar tweets number in the hundreds of thousands. And you thought you had a bad day at work!

Her rendition was so universally-loathed that Fergie actually apologized for her performance the next day. Here’s what she told TMZ:

“I’ve always been honored and proud to perform the national anthem and last night I wanted to try something special for the NBA. I’m a risk taker artistically, but clearly, this rendition didn’t strike the intended tone. I love this country and honestly tried my best.”

Pretty rough stuff, huh? To hear even more priceless reactions to Fergie’s performance AND sneak a peep at some of the well-received musical acts from the night, be sure to watch the video below.

And, of course, go ahead and watch her national anthem performance for yourself when you finish that video. Just don’t say we—and everyone with a Twitter account—didn’t warn you!

We’d love to hear your thoughts on Fergie’s take on the national anthem. Did you like the performance? Do you think more artists should take risks like this? Who sang the best-ever rendition of “The Star-Spangled Banner?”