Fearless Tot Knows How to Climb to New Heights

At just a few months old, babies tend to turn into little busy bodies who like to squirm, crawl, roll, and climb. It then escalates into bigger adventures like tumbling or jumping from places they shouldn’t. Daredevils in the making!

Born to scale the walls, 2-year-old Ellie Farmer started climbing when she was just eight months old. It first began with jailbreaking out of her crib. In this video from Barcroft TV, we learn Ellie’s parents, Zak and Rachael, are professional rock climbers and they built a climbing wall in the little girl’s nursery when she was just a baby.

Before she learned to walk, she was climbing the knobs thanks to being initiated at a young age. After having Ellie, Rachael and Zak continued their own training, bringing their baby girl along to watch. Absorbing everything and everyone around her with her infant Spidey senses, Ellie first got the hang of things around six months. 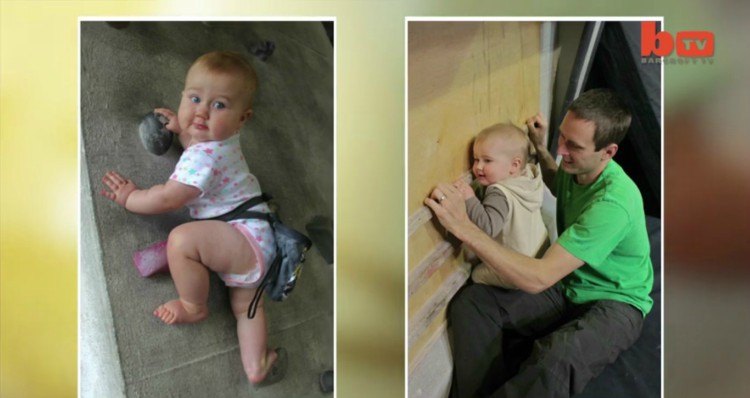 Barcroft TV
By the time she was eight months old, she could ascend the wall in her room. Amazing! Fearless and fun-loving, the prodigy tot has been nicknamed Little Zen Monkey by her parents. A shared family post of her abilities on social media soon spread, and at the age of 1, Ellie lit up the internet. She was even invited to be on the Ellen show to demonstrate her prowess.

Now she’s older and has arms of steel! Check out how she dusts her hands and runs straight for the wall with her little chalk bag attached. It’s adorable. And be sure to catch a glimpse of her facial expressions!

When you watch the video, you’ll notice one thing that stands out: Ellie’s not wearing any equipment. Where are the ropes and helmet? Good question. Well, at this age, she mostly climbs a bouldering wall so safety gear is limited to her own clothing, which is sometimes padded.

In rock climbing lingo, boulder walls are small training walls that involve taking short climbs without harnesses or ropes. Usually chalky hands, brain power, and strength are what’s used. It helps climbers learn to balance, focus, and find their routes. Can you see how Ellie’s doing that?

Dad Zak explains that when she climbs, there are thick crash mats around for safety as well as both parents for spotting. He also notes that her biggest injury has come from falling on the sidewalk. When you watch her climb, you can tell that Ellie is great at problem solving and knows how to manipulate her own body weight. She’s balanced, strong, and happy!

One of the things Zak and Rachael learned through sharing Ellie’s feats online is that other parents are inspired to engage in activities like these with their own children. I can see why! Check out Ellie’s unbelievable skills below and hear what else her parents have to say about her reaching new heights.

What do you think of this rock climbing little girl? Does Ellie inspire you to want to become more active? Are you interested in scaling walls like this family? Share with us in the comments!