This Father-Daughter Duo’s Rendition of a ‘Tangled’ Classic Will Absolutely Amaze You!

Claire and the Crosbys

When it comes to viral clips, we think the absolute BEST ones involve singing, dancing, extreme sports—anything that shows off special skills (though we do love a silly dog video here and there, too). One of the most amazing parts about being able to browse away on YouTube is the fact that there is just SO much talent out there to discover!

Speaking of talent, we think it’s time that you get introduced to two of our favorite rising social media stars. Meet 4-year-old Claire and 29-year-old Dave Crosby. These Seattle residents have more than genes in common; they both love to sing and are really good at it. 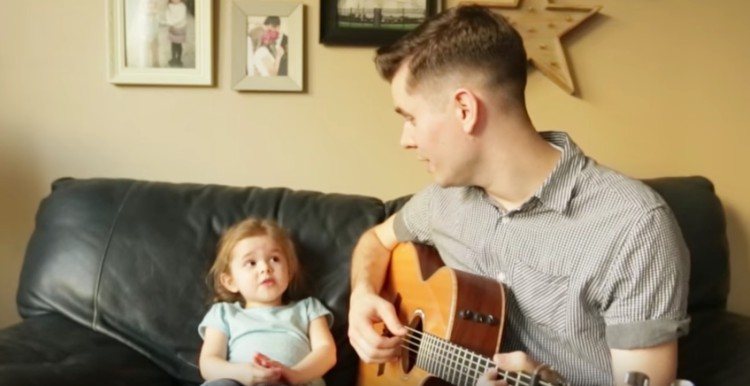 Claire and the Crosbys
The daddy-daughter duo has been uploading videos of them covering Disney classics for the past year or so, and have garnered over 52 MILLION views thus far. Not too shabby considering half of the pair isn’t even in kindergarten yet!

The first clip that the two uploaded to YouTube was a low-budget (compared to what they do these days) fan video of “Part of Your World” from The Little Mermaid.

Though that movie is technically a bit of a throwback considering it was released about 25 years before little Claire was born, the girl immediately fell in love with the song. In an interview with Parents, her dad explains how his little one went from singing this song around the house to becoming a YouTube sensation.

He says, “One day, I was getting an oil change and while I was paying, [Claire] suddenly burst out into The Little Mermaid song, walking around the waiting area and being so dramatic. It made everyone in the waiting room laugh and people were pulling out their cell phones and recording it. That gave me the idea to put a video on YouTube.”

Since their initial upload, Claire and Dave have made over half a dozen covers of popular Disney songs. One of them even caught the attention of everyone’s favorite talk show host, Ellen DeGeneres, who was so enamored with the twosome that she even had them perform on her show!

Claire and the Crosbys
Though we love all of the Crosby’s classic covers, we gotta say that our absolute favorite is their performance of “See the Light” from Tangled.

To make this particular video extra special, Dave actually hired a production team to help him and his daughter recreate the epic lantern scene from the movie. They all traveled to Salt Lake City, Utah during the The Lantern Fest to get the right shots. Pretty impressive considering this is just a hobby for the two.

Now, we could go on and on about the stunning details of this video, but we really think you should see it for yourself. Both father and daughter truly have some breathtaking voices. And, to think, she was only THREE when this was filmed!

Click on Claire and the Crosby’s clip below to witness the remarkable pair sing their hearts out for yourself. Something tells us little Claire is destined for stardom!

What do you think of this pair’s cover of the Tangled classic? Are you in a family musical group? What’s your favorite Disney song? Tell us all about your thoughts and experiences in the comments section below!