Grandpa Has the Best Reaction to a Birthday Prank

If you ask us, there’s nothing quite like a good prank, ESPECIALLY if it’s on an unsuspecting family member. And no time is riper for the pranking than a birthday, where one person is the center of attention. It’s not necessarily their fault, but the opportunity to fake them out is just too easy and appealing to avoid.

You’ve probably seen trick birthday candles that refuse to blow out, or gifts where something springs out at the ignorant birthday boy or girl. But we’ve never seen a birthday prank quite like this.

The birthday boy (or man, we should say) is the grandpa of the family, and he’s just getting ready to cut into his delicious looking birthday cake. He preps his serving knife and begins to cut as his family sings “Happy Birthday” around him.

But something odd is happening; grandpa’s having a seriously hard time cutting into his cake. At first we think the cake is just dense and hard to cut into, but after he’s tried it at a couple different angles, it becomes clear that something fishy is going on. 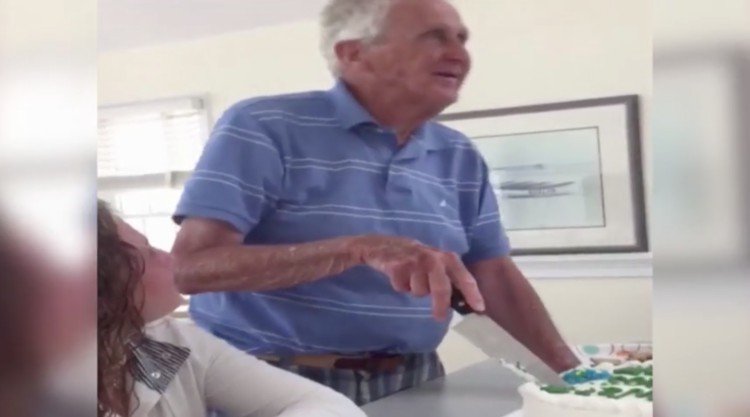 AFV
Finally, after a long attempt to cut the cake, a family member wipes the frosting off the top. Grandpa scolds them, telling them not to wipe the frosting away, and the family members combats that by explaining, “he won’t want that much frosting anyways.”

It’s clear to us that they’re actually trying to show him something that’s hiding under all the icing! But even after they do that, grandpa’s not getting it.

Someone else steps in and takes the knife from grandpa. They attempt to stab the cake in the center with the tip of the knife, but not even that works. At this point, the jig is up and grandpa has almost figured it out.

“It’s Styrofoam, grandpa!” Someone says, poking at the bouncy cake with their finger. “Poke it, poke it with your finger.”

Grandpa pokes at the cake with his finger and says in bewilderment, “It’s Styrofoam?”

And then he bursts into the most hilarious laughter we’ve ever heard! He’s hysterically laughing, with a guffaw that’s almost fake! But we can tell by the joyous look in his eyes that this is real, genuine laughter.

We don’t know what’s funnier, the prank or his reaction! Either way, we know that this was one successful prank; not only did it fool the victim, but it made him laugh, too! When a prank is so funny it can make you and the person being pranked laugh, you know you nailed it.

What do you think of this fake cake prank? Share your thoughts in the comments section below.