This Struggling Family of 12 Gets Their Dream Home

Bernadette was everyone’s favorite Starbucks barista. With her fun personality, her innate kindness, and her passionate love for Oprah (although, let’s be honest, who doesn’t love Oprah?), customers loved her. They loved her so much, in fact, that they wrote to Oprah telling her about how badly Bernadette wanted to meet her. And, Oprah being Oprah, Bernadette got her wish – and so, so much more than she could have dreamed.

On November 11, 2004, Bernadette’s life changed forever when Oprah came strolling into her Starbucks. The crowd around sobbing Bernadette is in awe as Oprah tells her that she’s here because so many people emailed her, raving about Oprah’s #1 fan. After commanding Bernadette to take the day off, Oprah spends some time with the barista and learn a bit more about her difficult life.

On her salary alone, Bernadette supports 11 other people; her elderly mother, her own three children, and her seven nieces and nephews, who otherwise would have been placed in foster care. Because Bernadette can only afford so much, all 12 of them live in a cramped apartment, in a dangerous neighborhood, with basically no room to spare; they even have to sleep three to a bed to make it work.

Well, not on Oprah’s watch.

After spending the day, Oprah invited Bernadette and her family to the show, where she is called up on stage. There, Oprah reveals to her that her family will have full access to “Dream Decorator,” Nate Berkus. Not just that, but Nate will be helping Bernadette style her brand new living room set, her gorgeous new kitchen, and all new bedrooms for each one of her family members – 12 in total.

But where is this family going to keep all their new swag in their cramped apartment? Don’t worry, Oprah’s got it covered. 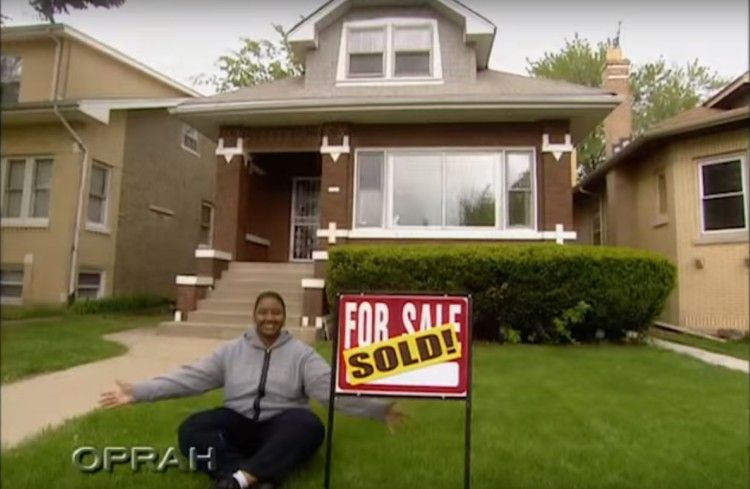 OWN
She then reveals the final gift to Bernadette – that the show will be buying the family of 12 a brand new house. In an extremely emotional moment, Bernadette and her kids all begin to cry, realizing that their lives have just completely changed.

Even better, Bernadette was allowed to go out and select a house that SHE loved for her family, rather than just being gifted a random home. After months of house hunting, Bernadette finally found a beautiful, big, old house that she felt had a lot of potential for her family.

The house is large and maybe from the 1970s, with a serious old-house charm to it. But even the interesting architectural aspects of the house and its many amazing rooms could use some touching up – which is where Nate Berkus comes in. Nate laid out a whole plan to redo the 70s-styled paneling in the basement, the not-so-charming kitchen, the tiny kids’ bathroom, and an amazing way to decorate the challenging bedrooms.

We bet it came out looking amazing!

This is such a beautiful story. Someone who was struggling for such an amazing reason, sacrificing so much to help the children in her life, couldn’t deserve all these gifts more.

What do you think of this touching story? Share your thoughts in the comments section below.