How a Fake Dog Is Bringing Real Love to the Elderly

You know the feeling you get when your dog greets you at the door or snuggles up with you after a long day? That happy, joyful feeling, that even after a long, hard day at work, your dog just wants to love on you—and there’s nothing you want more either. It’s truly one of the best feelings.

There’s actually science behind that. Playing with or petting animals, especially dogs, can increase levels of oxytocin (the happy, stress-reducing hormone) and decrease cortisol (the stress hormone).

Similar to real dogs, there’s also research that robotic animals can also help reduce stress and anxiety—specifically in people with dementia. That’s where Biscuit comes in.

Biscuit is a robotic pup that’s lending a hand—err, a paw—to care for people with dementia. He currently resides at the Templeman House, a residential and dementia care home in Bournemouth, England. And he’s changing the game for how he helps the elderly. 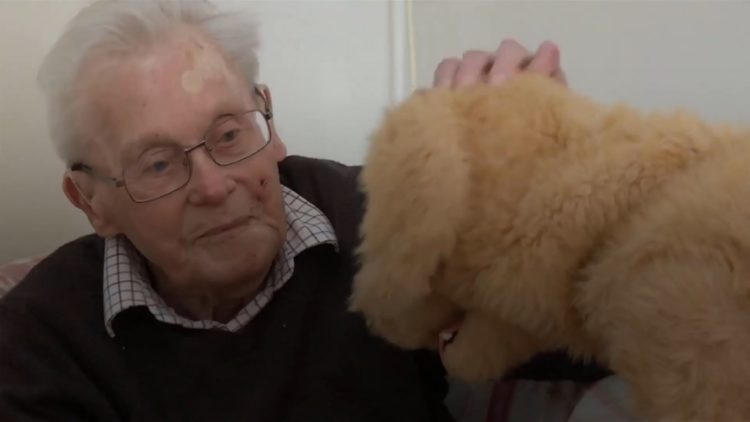 Biscuit is furry and adorable on the outside, but is made up of sensors on the inside, which help him react in different ways when being petted, talked to, etc. He responds to touch and speech to mimic the movements of a real dog to lighten the mood of the members at the care home.

“When we do have residents that are getting particularly stressed or very anxious, the manager or the staff will bring Biscuit out,” says Simon Bird, the deputy chief executive at Care South, which owns Templeman House and several other care homes in England. “He’s a good distraction. He reduces stress levels.”

There’s an estimated 850,00 people in the United Kingdom living with dementia, which is an upsettingly debilitating neurological disorder that affects your brain and memory. (Alzheimer’s is the most common type of dementia.) The worst part about it is that, while some drugs can slow down its progression, there’s no known cure for dementia.

That’s why Biscuit plays such an important role in helping the patients. Some of the members of the home talk to biscuit like he’s a real dog of their own. He’s truly making a difference. 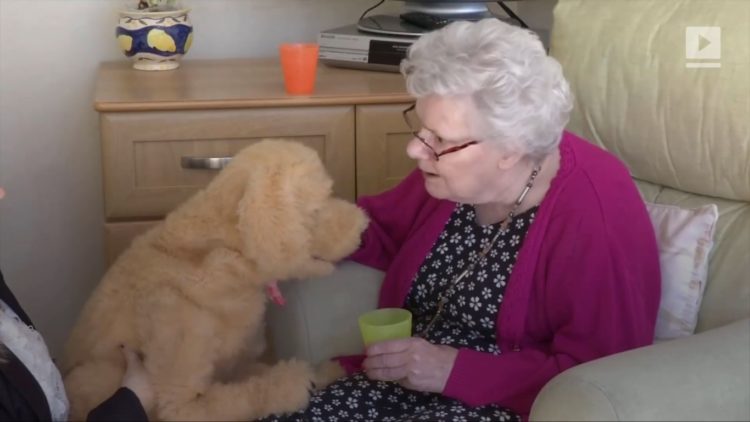 “He does stimulate memory and also encourages a lot of social interaction and recollection and reminiscence,” Bird said.

That’s right—Biscuit helps to encourage conversation and even elicits memories from patients, which a big deal for people suffering from dementia. One patient at the home is named 99-year-old Ron Grantham, who used to go fly-fishing with his dog named Spot, which he told a staff member after meeting Biscuit.

“I found out today that Ron used to go fly fishing when he finished work and take the dog across the fields with him while he fished,” said Deanna Barnes, home manager at care home. “We didn’t know that before. So obviously the dog brings out memories that they can reflect on and tell us.”

To learn more about Biscuit (from his perspective) and all the good that he does, check out the adorable video below.

What do you think of robotic dogs? Do you think they have the power to help people of old age suffering from terrible illnesses?