A couple in Newberg, Oregon has beaten unthinkable odds. When Logan Brown-Fletcher and Amber Hills were told they were pregnant, the young couple was ecstatic at the idea of being parents. And when they were told they would be having triplets – well, they weren’t any less excited, they just knew they had some work ahead of them! But neither of these parents-to-be were expecting what was going to happen next.

The entire story of the birth of these triplets is riddled with logic-defying, and often terrifying, circumstances. The trouble truly started when Amber learned she had an ovarian cyst the size of a basketball inside of her. While it was unclear what the cyst might have meant for Amber’s safety, she was mainly concerned about how it would effect her unborn children.

In fact, she recalls crying for her first time throughout the pregnancy upon hearing this scary news.

“I was so scared I could lose the babies,” she said in an interview with Oregon Live. “I bawled the whole way home.”

Amber had surgery to remove the ovary and the cyst, which had twisted inside her and caused her “the worst pain (she’s) ever felt.” Despite the pain, the surgery was successful and both she and her babies were deemed safe.

But then things took a turn for the worse.

During a routine checkup, doctors were having trouble finding one of the babies’ heartbeats. Once they found it, though, it dropped dramatically. Although her C-section had been scheduled for Aug. 4, Amber had to have an emergency C-section at just 33 weeks.

As scary as the premature birth was, Amber delivered the three babies — Raelyn, Avery, and Elaina — all alive and relatively healthy. Luckily, it wasn’t a major condition that put them in the neonatal ICU (or NICU), only the issue of their early birth. The moment Amber saw her daughters for the first time was unforgettable, she said, calling them “the loves of my life.”

“I was so happy, my heart was full and I was totally in love,” she said. “I want to  be with them all the time. It’s hard to be away from them.” 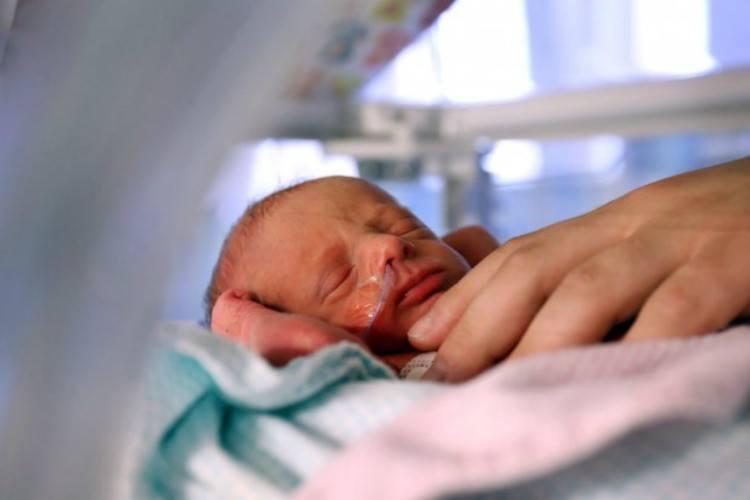 Oregon Live
However, the bizarre circumstances weren’t done there. As it turned out, the three girls were perfectly identical triplets, which is an extremely rare case.

Neonatologist Dr. Craig Novack has been working in the field for 22 years and has only seen one other set of identical triplets. While there aren’t any statistics to back this assertion up, Novack put the likelihood of having identical triplets at “one in a million.”

Even more shocking is that the couple conceived the rare babies with no hormones or fertility treatments. This was an all-natural conception and the couple’s first time as parents, which makes these odds even less likely.

Currently, the babies are healthy doing well in NICU. They should be coming home any day!

The young couple reported that the community has been extremely supportive providing funds as well as essentials like strollers to help ease the financial difficulties of having multiples. We’re sure that these rare little girls are going to have a wonderful life with parents who love them very much, and we’re relieved to see them alive and well.

What do you think of this incredibly rare birth? Share your thoughts in the comments section below.