Like Pop Rocks, Coca-Cola, and graham crackers, potatoes come with their own set of rumors and urban food legends. A favorite of carb lovers everywhere, whose existence is responsible for the mythical magic of French fries and mashed ‘taters, also seem to pose a poisonous problem.

That’s the rumor, anyway. To help solve this dilemma, we had to dig up some science. You know those green spots on potatoes that have people concerned? Turns out it’s a legit one. I know, I know. It’s one more thing to worry about. But before we shed tears about one of our fave root veggies, let’s take a look at this together.

Chin up. That green color you see on certain skin parts of potatoes is formed by chlorophyll, which is normal and okay when it comes to plants. But with potatoes, it also signifies the presence of solanine, a compound that’s toxic in large doses. Common in nightshades, solanine is also found in these other plants: tomatoes, eggplants, peppers, and more.

In potatoes, solanine is produced when they are exposed to light, with fluorescent light being one of the main agitators. Light-activated solanine development is fairly unique to the potato, and according to the FDA, professional growers treat potatoes to avoid such problems.

Sometimes those green skins slip through the cracks though, as evidenced in a bag of potato chips or frozen French fries. The chemical can survive heat and water exposure, making it a tough one to beat. The FDA also points out that the highest concentration of solanine is in the fleshy part directly under the green skin or in the sprouted eyes. You don’t want to eat that! 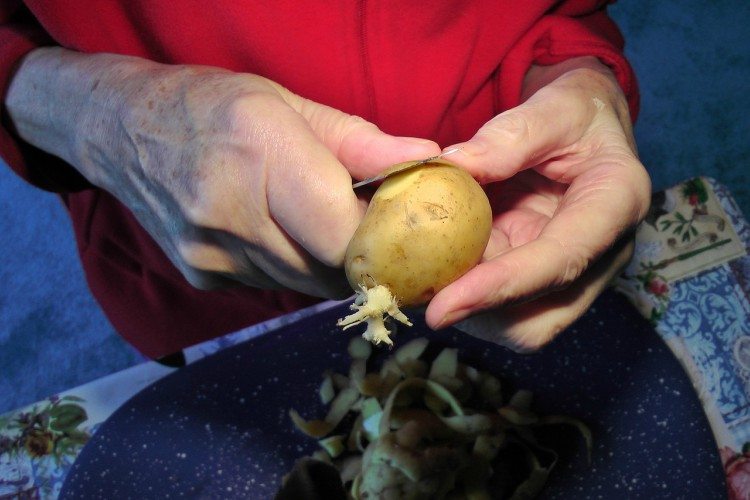 Among the reactions solanine causes in humans are nausea, headache, stomach upset, diarrhea, and vomiting. Severe responses include paralysis, coma, or hallucinations. Because the green parts have a bitter taste, most people and animals avoid ingesting it. It’s quite rare for someone to get sick but it depends on a few factors.

Your body size plays a role, but illness has been recorded in people who’ve eaten 30 to 50 mg of solanine per 100 mg of potato. As Science Based Medicine puts it, you’d have to eat 67 large potatoes to have a seriously adverse reaction. Because solanine travels to the gut, most people who eat a small amount expel it quickly without any problem through normal elimination.

How can you avoid eating potato solanine? If it’s 100% green, has sprouts, or tastes bitter, throw it out. If the spot is small, peel or cut it out down through the flesh. Store your potatoes in a dark place to avoid light exposure. If you don’t have someplace to contain them, put them in a paper bag. But again, it takes a large content to really make you ill.

For now, you don’t have to worry about an attack from killer potatoes, unless you have a fondness for their green sprouts. That’d be unwise. Just chuck them, peel them, or definitely don’t buy a bag with sprouted green eyes.

Have you been living dangerously and eating the green spots of your favorite potato-ey foods? Were you avoiding green ones all together? Has a green potato ever made you sick? Tell us in the comments!