Question: how often do you encounter—and pass over—a person in need, only to later regret your dismissive actions? We’re not too proud to admit that we too have put our heads down and continued walking when asked for food or money from folks who are clearly going through a hard time.

It makes us feel terrible, of course, but it’s fair to say that we have been conditioned by society to be wary of beggars. Perhaps the individual in need has put themselves in the situation. Maybe they are using our money to buy drugs. Some might even say they are just “being lazy.”

We, too, have heard the many arguments that are used to dissuade an unprejudiced act of giving—and, honestly, they’re starting to sound pretty tired to us! These days, we’re fully “team help, no matter the circumstance” and today’s story perfectly illustrates why.

In 2015, a Southern New Hampshire University student by the name of Casey Fischer posted a remarkable story on her Facebook page. At first glance, her tale seems mundane enough. The college student was just stopping by her local Dunkin’ Donuts to get her caffeine fix when she noticed a man “singing on the side of the road and picking up change.”

The stranger, who she immediately recognized as being homeless, strolled into the coffee shop after her and began counting his money. She writes that the man, who later introduced himself to her as “Chris,” only had a dollar in change on him—not enough to purchase any item off of the menu.

Casey, spotting the man’s dilemma, bought him a cup of coffee and a bagel and asked him to sit down with her. What transpired next was an hour-long conversation that revealed a whole about the stranger’s tough life. Casey writes:

He told me a lot about how people are usually very mean to him because he’s homeless, how drugs turned him into the person he hated, he lost his mom to cancer, he never knew his dad and he just wants to be someone his mom would be proud of…

Once the student realized that it was time for her to get back to class, she started to say her goodbyes to Chris, but the homeless man felt that he needed to tell her something before they went their separate ways.

With shaky hands, Chris scribbled a parting note to his unexpected breakfast guest. It read:

I wanted to kill myself today because of u I now do not. Thank u, beautiful person. 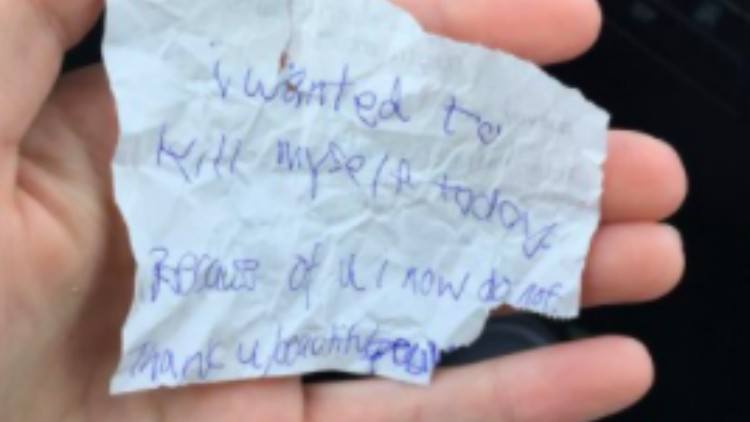 Since being posted almost 2 ½ years ago, Casey’s sweet words have been shared well over 100,000 times on social media. The comments section of the original Facebook post is filled with support for both the college student as well as the homeless man. One commenter wrote:

I love this! And i love how something so simple and selfless can make such a difference in someone else’s life. Good job!

Another congratulated Casey for actually acting on her kind instincts:

Bless your kind soul. People preach kindness but seldom act. You are a rare breed and I’m proud of you even though I don’t know you.

We couldn’t agree more with these well-wishers. May this story inspire all of us to get out there and make a connection with someone in need, no matter how simple the gesture may be. You go, Casey!

We’d love to hear your thoughts on this powerful story. Have you ever helped a total stranger before? Have you ever had a stranger step in to help you? In what ways do you donate your time to your community?