Who’s your all-time favorite child-actor-turned-movie-star? There are a lot of great options to choose from, from classic starlets, such as Judy Garland and Elizabeth Taylor, to modern Oscar winners like Leonardo DiCaprio and Natalie Portman. Though they are, undoubtedly, fantastic performers, our favorite is still—and will always be—Drew Barrymore.

We first fell in love with her upon our first viewing of E.T. and our obsession only grew as we watched her blossom into the ultra-likable superstar that she is today.

In recent years, she has taken on less acting roles so that she can work behind the scenes as an executive producer. She also acts as the founder and CEO of Flower Beauty, her hugely successful cosmetics line. Oh, and did we also mention that she’s a mom to two preschoolers? Talk about busy!

The renaissance woman is so busy, in fact, she does the very same thing that so many time-challenged mommas do—she takes her daughters with her to the beauty salon. Celebrities: they’re just like us!

In a recent viral Instagram post, Barrymore shared the above photo of her oldest daughter—and COMPLETE mini-me—Olive along with this adorable caption:

Tracy puts conditioner in foils on her for solidarity.

The “Tracy” Barrymore is referring to is none other than hair guru Tracy Cunningham, a master stylist who does the hair of all of your favorite celebs. It seems as though Cunningham has not only discovered the secrets to eternal hair beauty—she has also mastered the all-too-common issue of squirmy kids in hair salons.

We hope that other salon owners take note of this lady’s genius! You just know that these “mommy and me” foils entertained the little one for at least a few precious minutes. BRB while we tag our hairstylist in the comments section of this pic…

The adorable little one from that hair salon shot is Barrymore’s 5-year-old daughter Olive. The actress is pretty good at protecting both of her kiddos’ from the glare of the media spotlight, so we don’t know too much about the tot, but one thing is for sure… 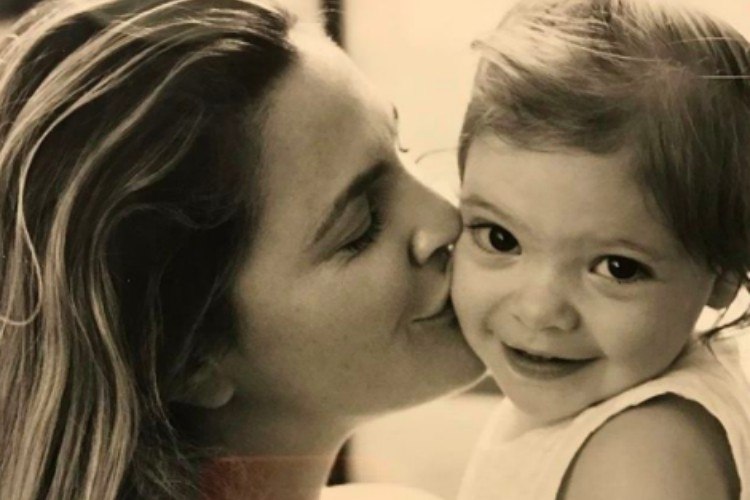 … Olive looks EXACTLY like Barrymore did when she was a kid.

You do see the resemblance, right? If we didn’t know any better, we would have guessed that the photo was actually a shot of E.T.-era Drew Barrymore. In fact, we think she looks so much like her famous momma that the similarities in appearance may just rival that of another famous Hollywood kid, Reese Witherspoon’s daughter, Ava.

We just love watching our favorite former child star grow and evolve! To see even more pictures of the Hollywood mom and her lookalike daughter, be sure to watch the video below.

We’d love to hear your thoughts on all things Drew Barrymore! Do you think her daughter Olive looks like her as a child? Who is your favorite former child star? What’s your trick for keeping your kids occupied while you’re at the hair salon?