You Need this Guide to Stinging Insects

Can you recount how many times you’ve been enjoying the outdoors when you hear a buzzing sound near your ear? Or better, you spot the source of the buzzing up close and personal? You either freeze, swat, or take off running with your arms flailing.

It’s understandable to dislike bugs. Stinging insects can be scary for several reasons. Some people are allergic. Some have been stung and don’t want to repeat the painful experience. And others are mortified by their appearance. How many of you think that wasps resemble otherworldly flying aliens with their tiny waists? It’s weird and creepy.

Dropping some educational tips on how to avoid stinging bugs is Missy Henriksen, a representative for the National Pest Management Association. Here we learn the difference between wasps, bees, and hornets, and how to identify them.

Their bodies are long and skinny without any hair. They favor building their nests high up in trees, on the upper part of door frames, porch ceilings, or under roof eaves. Can you tell they like elevation? Missy says they generally won’t sting unless they’re in defense mode.

They resemble wasps in appearance but are much meaner in disposition. Hornets typically show up in late summer but you do not want to cross paths with them. Not only do they sting anyone in their territory, but they can do it over and over. And boy does it hurt. Yikes!

Their nests are found in tree branches, houses, or sheds. Missy recommends calling a professional for removal. 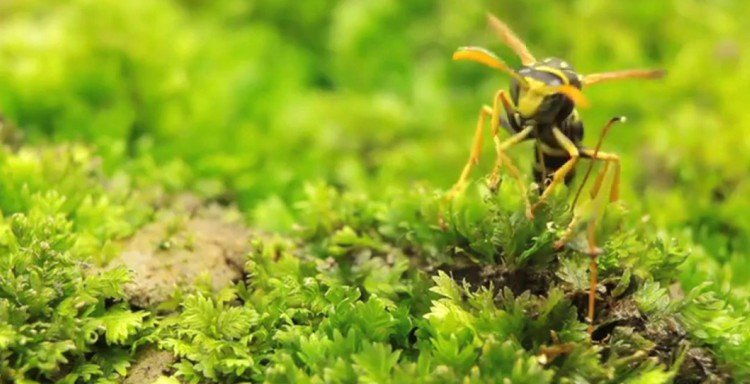 Bees are feared but also receive plenty of affection in our everyday lives. Their likeness decorates fabric, art, and commercial products all over the world. But we’ve learned to have a healthy respect for them because they can still inflict pain.

Here, Missy talks about three species of bees that we normally encounter. Honeybees like to hang out together in hives and stay busy as pollinators. Bumblebees are larger and have the ability to sting multiple times. Carpenter bees are also large but prefer to pig out on wood rather than attack humans.

Click on the video to learn what each nest type looks like and to get a glimpse of the physical traits of each insect. Missy reminds us to be cautious when meeting one of these tiny beasts. She says to stay still and don’t engage it in a swatting match – it’s highly possible you’ll lose. You can, however, check out how to repel the bugs with a fake nest.

In case you are stung, remove the stinger and apply ice to relieve pain and swelling. Doctors discourage using tweezers as they can push the stinger in further, causing it to release more venom. Instead, it’s recommended to scrape it off with a credit card or butter knife.

For those who are allergic or experience a serious reaction, seek medical attention immediately. If you notice an active nest in or on your property, don’t try to destroy it yourself. Call a pest control service.

Do you know the difference between each of these insects? Not everyone has been stung, but have you? What home remedies do you use to treat stings?