Watch This Dog Joyfully Bound After a Ball Into a Pile of Leaves!

Guys, it’s officially fall! The absolute BEST time of year, in my humble opinion. You can finally bust out of that sweltering, summer fog, and start displaying your cute coats and scarfs. You know who else likes this season? Dogs! Once they feel that first, crisp chill in the air, it seems that most bound towards the first neat pile of leaves they can find.

Dolly the Labrador Retriever is something of a leaf devotee. Seriously, this dog’s passion for dry, dead foliage is unmatched. That’s why his clever owners showed the pup a pile of this colorful plaything and let the camera roll.

Right on cue, the yellow Lab runs towards the mountain of leaves without hesitation. She’s so joyful and happy that even her owners can’t stop cracking up. This woman’s howling laughter is so contagious!

At one point, the man makes a remark as the dog disappears into the pile. “Where is he? All I can see is a tail!” Honestly, I barely even see a flash of the dog’s tail. It’s like Dolly completely vanishes!

When the animal re-emerges, Dolly’s owner asks the dog a serious question: “Where’s the ball? Find the ball.” The look on the dog’s face says it all. 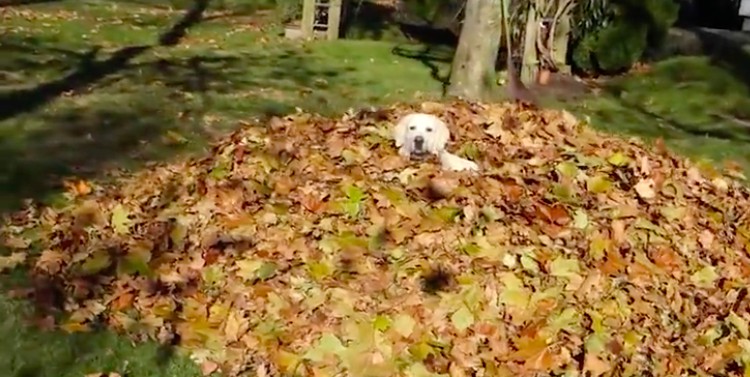 AFV
Let’s just say that this is the pup version of searching for a needle in the hay. For a second, it feels like the video has taken somewhat of a dark turn—just how is he going to find that ball?

Thankfully, his female owner has a bit more empathy for this confused animal than her male counterpart. She points out the ball to the disoriented doggy, and all is right with the world.

So, you may be wondering, why do dogs do this “roll-roll” routine anyways? Canines aren’t clowns or comedians—they’re not trying to necessarily garner a laugh.

There are actually several reasons why pooches are attracted to rolling on rough foliage, like leaves, grass, and shrubbery.

According to PetMD, the main motivation for this behavior is inherently genetic. We all know that dogs originally descended from wolves, and it has been noted that wolves display this behavior when they encounter “novel smells” that they want to get onto their body—sort of like a doggy perfume!

These animals may also display this behavior when they want to get rid of unwanted smells on their bodies, or if they have itchy, dry skin. We all know that dogs love to be scratched, so this isn’t necessarily a groundbreaking idea!

Sadly, excessive rolling in the yard may be a sign of obsessive behavior. Luckily, vets say that this can be easily remedied by implementing a steady play schedule and rewards system.

Watch the video below to see Dolly the Labrador in action!

Does your dog like to roll in leaves? What’s the funniest behavior that your pup has ever exhibited? Do you have any personal favorite doggy viral videos? Let us know all about your thoughts and experiences in the comments section below!