When Snake Meets Toddler, A Rescue Dog Is A Hero

What would you do if the Doberman you had rescued and brought into your home only four days ago suddenly picked up your toddler by the diaper and threw her to the side? Like most parents in that situation, “alarmed” would probably be an understatement, but as Catherine Svilicic learned when this nightmare scenario played out in her Atherton, Australia garden, rushing to blame the dog wouldn’t be the correct reaction, either— because there might be a more slippery, slithery, sinister creature involved. That’s right— the dog just might be rescuing the child from a poisonous snake!

In the Svilicic family’s case, that’s exactly what was happening when Khan the Doberman seized 17-month-old Charlotte and threw her off the garden path on which she had been happily playing. When she witnessed the act, Mrs. Svilicic was initially shocked, but her reaction was almost instantly replaced by gratitude when she saw the large, poisonous king brown snake lying where her child had been about to step. The Advertiser reports:

“If I had not seen it with my own eyes, I would never have believed it,” Ms Svilicic said.

“Khan was really concentrating and was acting aggressive towards Charlotte and kept trying to nudge her but it wasn’t working, so he grabbed her by the back of the nappy and threw her more than a metre.

“I realised quickly it was a snake and Khan had been trying to get in between her and the snake before he threw her.”

The Doberman’s protective instincts are particularly impressive considering Khan had only been a member of the family for about four days, having recently been adopted from the Doberling Boarding Kennels. Before his rescue, Khan had been, according to Doberinling Boarding Kennels owner Kerry Kinder, “an abused dog”— beaten, starving, with broken ribs and low chances of survival. “It was borderline on whether or not he should be put down because he was in such a bad way,” Kinder tells The Advertiser.

But thankfully for little Charlotte, Khan did survive— and then went on to not only ensure the toddler’s survival, but battle through the snake’s bite, as well, because he not only took the little girl out of the path of danger, he put himself in it. As Mrs. Svilicic describes, Khan screamed when bitten, then ran inside the house, where he collapsed. A vet-administered shot of anti-venom saved the Doberman, who was able to return to a normal eating schedule a few days later. The Advertiser reports that “An Atherton snake expert believes Khan escape death because the snake was not able to inject a large amount of venom.”

Whatever the reason, the Svilicic family is certainly grateful to the incredible, protective pooch, and the rest of us can only hope that our own dogs will always be as on guard as this canine hero. 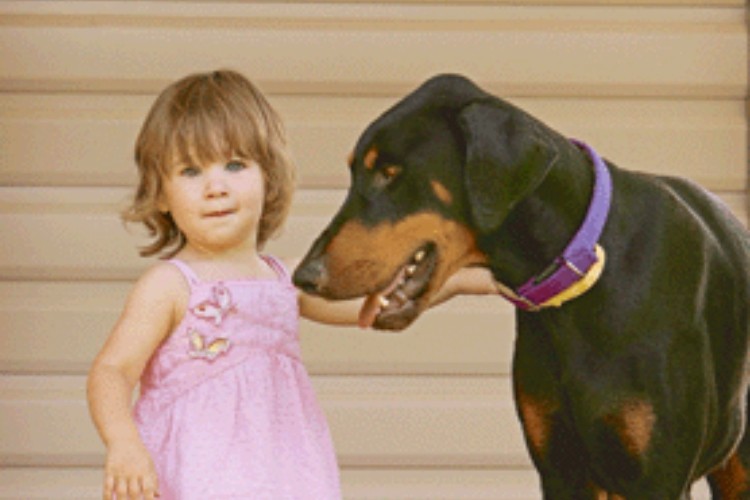