Why This Stunning Backyard Pool Was 20 Years in the Making

When it comes to beating that summertime heat, there’s nothing more satisfying than taking a dip in an ice-cold pool. It’s a pastime that kids, especially, can’t get enough of! Nonetheless, few homes these days are built with picture-perfect pools in their backyards, which means most folks have to settle for sharing an uninspired and often crowded community pool.

It’s a reality that most don’t mind facing, except for the intrepid few who decide to make their own, the DIY way. Take the star of today’s video, Micky Thornton, for instance. This is one guy who doesn’t mind digging, and certainly doesn’t cut corners!

When the Tennessee resident was 39 years old, he and his wife moved to Covington, a small town just north of Memphis. The couple had plenty of land at their disposal, so Micky decided that it was “now or never”—he was going to fulfill his childhood dream of making the greatest homemade pool on the planet!

Luckily, his wife, Jane was on board the moment he hatched his wild plan, but she did have one very specific request—she did not want the pool anywhere near the house. The only problem was that Micky would have to find a way to dig into an adjacent pasture, which just so happened to be situated on a set of rolling hills.

When he explained his conundrum to Jane, she gave him quite the comeback. “You’re smart enough, you can figure it out,” she said. Touché!

Once he figured out a way to make his terrain work for him and not against him, the amateur pool-builder got started on making a one-of-a-kind swimming hole, appropriately dubbed “Thornton Pool”. His custom blueprints called for a whopping 500,000 gallons of water poured into a pool that’s the size of your average farm pond!

He started on Labor Day in 1993, with plans to construct a pool that had a deep end that was, in Micky’s words, “big enough so you could swim around and not feel like you’re trapped in a little box.”

Since its inception, the massive pool has become a small backyard waterpark and includes a rope swing, a rock waterfall, a large shallow-end for young children, and a sky-high Jacuzzi! 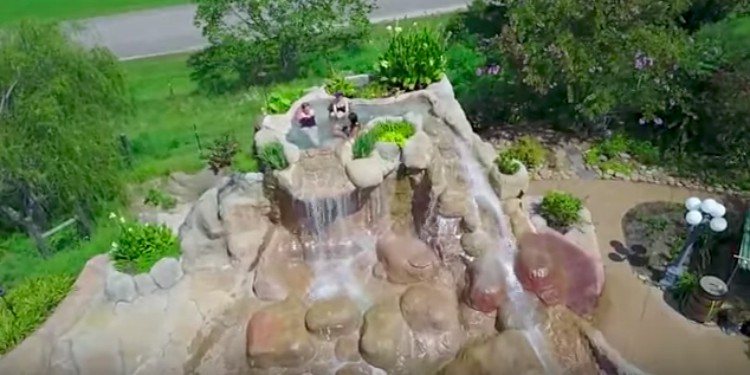 How the pool is used today

These days, the elaborate swimming hole is available for private events of all kinds, including prom photos, kids’ birthday parties, and even baptisms! With dozens of 5-star online reviews under its belt, it’s safe to say that this unique home waterpark is a hit. Good for Micky!

Now that you know all about Thornton Pool’s incredible backstory, it’s time for you to get a tour of this mind-blowing backyard feat. To meet Micky and hear about all of the work that has gone into maintaining the pool for the past 20+ years, be sure to watch the video below. We know where we’re headed on our next southern swimming trip!

We’d love to hear your thoughts on this awesome pool! What do you think of Thornton’s Pool? Have you ever built your own dream pool? If so, how did you go about completing it?