Angela Peters eventually got a manicure, but it wasn’t quite in the way she was expecting. Angela, who has cerebral palsy, recently headed to the Da-Vi Nail Salon, which is located inside the Walmart in Burton, Michigan, to get her nails done.

However, she says she was turned away due to the fact that she “moves too much” and the nail technicians wouldn’t have been able to give her a proper manicure, as cerebral palsy, a disorder of movement, muscle tone or posture, can cause tremors or involuntary movements.

One employee at the Walmart, a cashier named Ebony Harris, saw the whole thing go down, and, after recognizing Angela from a prior trip to the store, decided to take actions into her own hands.

Though not a professional nail technician, she wanted to make sure Angela was taken care of and offered to paint her nails herself. “I just asked her, ‘Do you want me to do your nails?’ And she just started smiling and said yeah,” Ebony said.

And so Ebony sat her down at a small table and began to paint Angela’s nails.

One woman named Tasia Smith, who works inside the Walmart’s Subway restaurant, witnessed Harris’ act of kindness and posted two photos of her painting Peters’ nails on Facebook showing Angela and Ebony sitting together, smiling, as Ebony paints her nails a dark blue color. 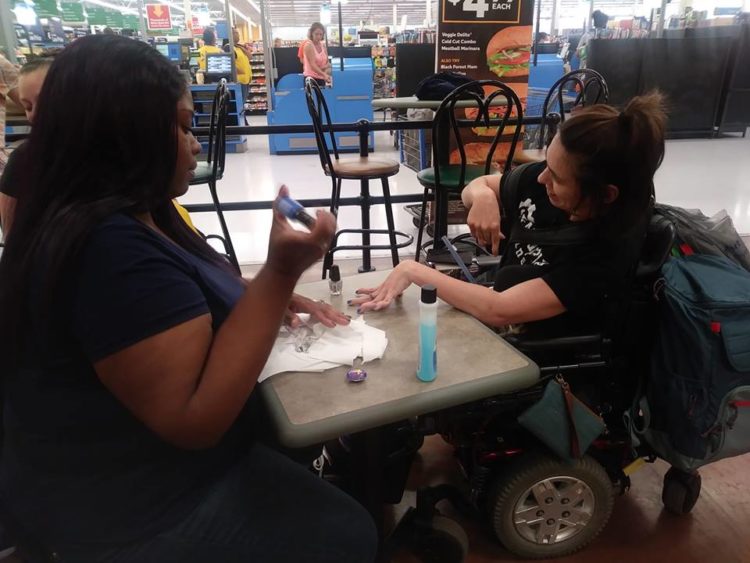 “Out of the kindness of the Walmart workers hearts they went and bought nail polish and came into my work to paint this sweet girls nails,” she wrote. “They were so patient with her (which she did great, barely moved & was just so sweet). It’s an absolute shame that they denied her for some thing so little. They will not be getting any service from me ever again! Thank you to the Walmart workers for making this beautiful girls day!”

Peters was so grateful to be able to not only get her manicure this day, but for Ebony’s patience and kind heart. Additionally, she was also glad that her story can now spread awareness to others. “I’m making new friends at Walmart as well, and they get to see my abilities, too. So it’s awesome,” she said.

Ebony wants to make it clear that with the story out in the open, she wasn’t trying to make the store look bad. She just wanted to ensure everyone is treated equally and that people might be able to gain something from the situation.

To hear more of the story, and to see how Angela feels towards the Walmart employees who turned her down, check out the video below (note: she’s one forgiving lady!).


What do you think of Angela being turned down a manicure because she moves too much? How sweet of it was Ebony to step in and get the job done?