We all know hotels aren’t the cleanest places in the world. Some of the rooms you’ve been to might look like luxury with its inviting, comfy duvet on the bed, robe in the closet, and Jacuzzi tub awaiting a soak.

But with guests after guests walking the floors of the rooms, sleeping in the beds, and using the toilets and showers, hotel housekeepers are bound to miss a spot or two when scrubbing up in the short amount of time before the next guests arrives.

Okay, they may miss more than a spot or two. In fact, there are way more disgusting germs hiding in hotel rooms than we even thought—and in some pretty unsuspecting places.

Researchers from the University of Houston swabbed the nooks and crannies of 19 different hotel rooms in Indiana, South Carolina and Texas. They tested every single square inch of the rooms, from the door handles to the light switches and table lamps. And what they found was pretty alarming.

The study found fecal matter on a whopping 81 percent of the surfaces they swabbed. So pretty much anywhere your hands can touch, there was fecal matter. Excuse us while we gag!

Perhaps the most surprising part of all wasn’t how much bacteria there was—because, let’s face it, are we surprised?—but where it hid the most. 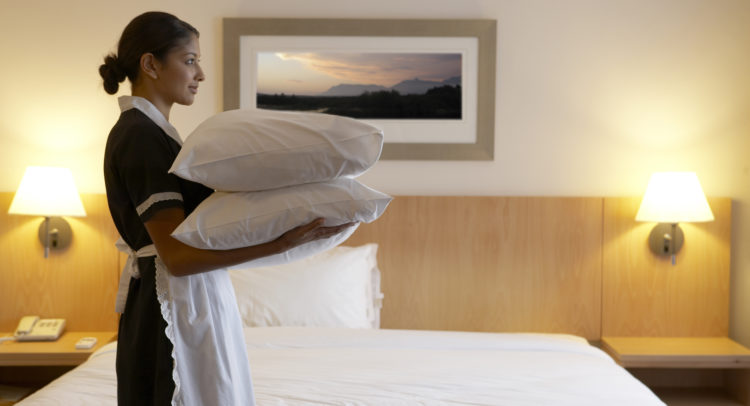 While you might think the bathroom would be the place with the most fecal matter, the most bacteria was actually found on the TV remote! So definitely think twice before you hit that dial.

Other places where germs bred most included light switches, the carpet, lamps, and the telephone. Additionally, the study found that even the cleaning items in housekeeping carts—sponges, mops, etc.—also came back with a high amount of bacteria. Shudder.

There is some good news: While it may feel like you’ll never book another vacation away again, the study wasn’t meant to scare us away from hotels forever—it was more so a way to perhaps give hotels a kick in the pants to pay closer attention to their cleaning standards.

“Hoteliers have an obligation to provide their guests with a safe and secure environment,” said Katie Kirsch, an undergraduate student at the University of Houston and author of the study. “Currently, housekeeping practices vary across brands and properties with little or no standardization industry wide.”

In fact, right now housekeepers judge when they’re done cleaning purely by “visual assessment,” which, as Kirsch says, “has been shown to be ineffective in measuring levels of sanitation.”

With this study now in place, housekeepers have a much better idea of where bacteria is lurking, and what items to pay close attention to when cleaning.

Until then, we’re thinking we’ll just have to wear socks and gloves at all times in a hotel room next time we’re in one!

Curious why the remote is the object with the most germs? Check out the reason in the video below!

If you had to guess, what would you have thought the dirtiest spot in a hotel room was? Were you surprised by the answer? Do you clean your remote control at home?