5 of the Dirtiest Things You’ll Find On An Airplane

We know that in order to cut down on airplane luggage fees, we try to pack light. But there’s one thing you want to keep close to you in your carry-on bags: sanitizing wipes. Believe it.

Don’t rely on your mom, your daddy, your sister, wife, or hubby to do it for you. Grab some for yourself. Why? Because airplanes are coated in germs in places that come in close contact to your skin. While you may think that it’s the bathroom that’s swimming in hidden grossness, there’s another part of the plane that you need to watch.

It’s your tray table. Some of you don’t touch those during a flight so you can gloat a little bit. But everybody else should know how things really measure up. From time to time, you’ll read lists that contain insider info for certain industries. Such lists can be juicy, informative, and worthy of an eyebrow raise.

When you glance at ones about airplanes, you can expect warnings on not drinking the water, safety equipment, and where the food comes from. Suspicions about tray table germs are on there too, but we’re sharing why.

Folded down, those little tables are used for things like meals, laptops (or other devices), and diaper changes. In between flights – especially those that run back-to-back – cleaning crews don’t have time to board and do their jobs. And the truth is that many airlines cut corners by not hiring cleaning crews at all. The FAA doesn’t even enforce it. 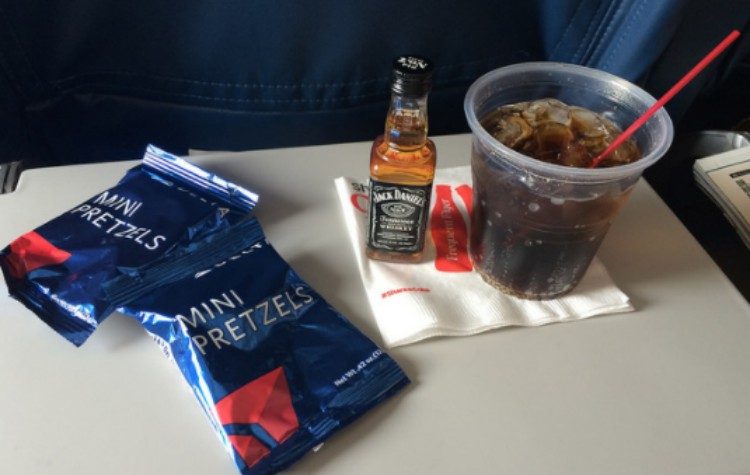 While flight attendants may pick up loose trash or quickly wipe up spills, planes are often boarded for the next flight without any type of sanitizing going on. It’s a bacterial and viral playground!

With that said, it should come as no surprise that when a microbiologist tested samples from five airports and four flights, bacteria was hanging out on most surfaces. In the study by Travelmath, tray tables had the most. Measured in colony-forming units (CFUs) per square inch, they had 2,155 CFUs. Ew!

Dirty diapers, snotty tissues, chewed gum, and who knows what else comes into contact with those tables. Trust no one but yourself to whip out some disinfectant wipes to scrub the ick. Make sure your food or fingers don’t touch the surface.

Curious about what else made the dirty list for airplanes? Click on this video from Wochit to find out what else you should avoid or clean when traveling by air. My gosh, you’ll never look at seat pockets the same way again.

You can pick up bugs anywhere, but why expose yourself to an increased risk if you can avoid it? Small preventive measures like carrying antibacterial wipes or hand sanitizer can do a lot for your health when you’re flying on a plane. Buy a travel pack of wipes and hit the vents, armrests, seatbelt buckle, and tray table.

Did you think that tray tables were the dirtiest or bathrooms? Have you ever gotten sick from being on a plane? Do you already prep when traveling by air?