When we think of the fast food chain McDonald’s, we probably imagine a lot of things that make our mouths water: French fries. Big Macs. Chicken nuggets. Nothing of which is healthy, of course. McDonald’s hardly has a reputation for serving up nutritious fare.

However, one licensed dietitian named Nyree Dardarian wants to put an end to the stigma of fast food being unhealthy. Okay, well—let us rephrase. Fast food isn’t really healthy. But nowadays, these types of restaurants offer much more than what they used to, McDonald’s included. Even Taco Bell recently became known as one of American’s healthiest fast-food chains (no we’re not kidding).

The point is, Nyree decided to take up her very own McDonald’s 30-day challenge. Remember the 2004 hit documentary Super Size Me, which chronicles a man named Morgan Spurlock eating Micky D’s flood for 30 days straight? He did this for the opposite reason as Nyree’s—to prove how unhealthy it is. However, Nyree wanted to show that you actually can eat healthy at McDonald’s—and consequently, other fast food joints.

“We have to learn how to live with [fast food] because it is here to stay,” she said, noting that it’s not really the place, but the portion sizes and choices of food people go with. 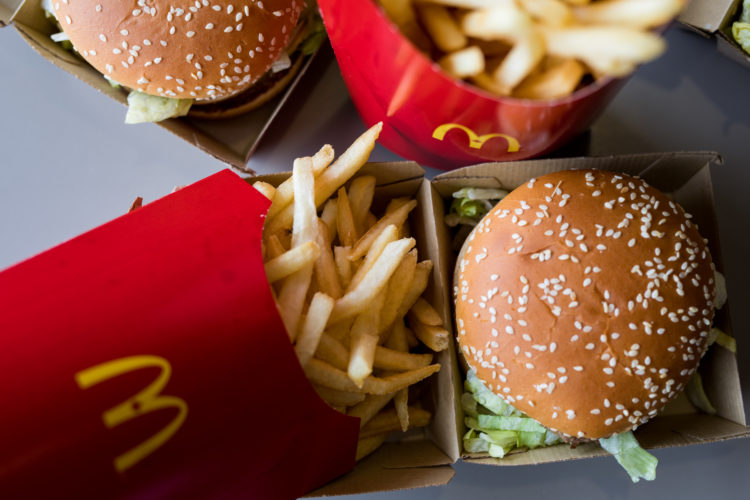 Like Morgan in Super Size Me, Nyree got her blood work done, measured her body fat, and recorded her weight so that she could see where she started and where she ended up after the 30 days were over. Also, she kept a food diary to showcase exactly what foods she ate as well as how many calories, carbs, fat, protein, cholesterol, sodium, sugar, and fiber were in each of her meals or snacks.

As the days went on, Nyree came up with a few different ways to ensure she was being the healthiest she could’ve been being. For example:

She refused to eat the super unhealthy stuff. Food she never ate included a double cheeseburger (440 calories), the double quarter pounder with cheese (770 calories), the big breakfast with hotcakes (1,350 calories) and the McFlurry (510 calories for the Oreo flavor).

She never ordered double of anything. She said that having two burgers, for example, can be too much high-fat protein for one meal. “It’s called a double for a reason. It’s twice as much meat and fat,” she said.

She modified some meals. For example, she’d take a Big Mac and remove the middle piece of bread and one of the patties—still satisfying but much less carbs, calories, and fat. Sometimes she’d order a regular hamburger with special sauce, which is healthier than a Big Mac but tastes pretty much the same.

So we know you’re dying to know what her results were after 30 days! Well, her physical body composition didn’t change much. She gained one pound, though she says she typically fluctuates in weight anyway. Additionally, her body mass index and blood work were still healthy. “All the values were within normal levels,” she said.

What do you think of this interesting experiment? Did you know eating fast food doesn’t always have to be such a calorie-laden meal? How are you going to approach your order next time you set food in a McDonald’s or other fast-food joint?