Hearing impairments can affect people in different ways, but to be born deaf means learning to live in a world without this sense. Or so it used to be. Depending on the type of hearing loss, people may have a shot at hearing. Like vision impairment, strides have been made in treating the condition.

Thirty-five-year-old Randy Adams of Canton, Georgia, was born profoundly deaf to two parents who were also deaf. Randy and his wife Michelle met four years ago and are now parents to Max, a 16-month-old toddler who was also born with the same trait as Randy – without his hearing.

Michelle admits that she though she loves and accepts Randy for who he is, she was sad when they learned about Max. Concerned about the life experiences he would miss out on, she began looking into options for him. Max started out using double hearing aids, but without much success. So Michelle decided to do some extra digging and researched cochlear implants.

According to the American Speech-Language-Hearing Association, a cochlear implant is a device that stimulates the auditory nerve in the inner ear. Using electronic impulses, its external and internal parts work to send sound signals to the ear. Receiving the implants have become a life changing experience for people who have been profoundly deaf their entire lives. 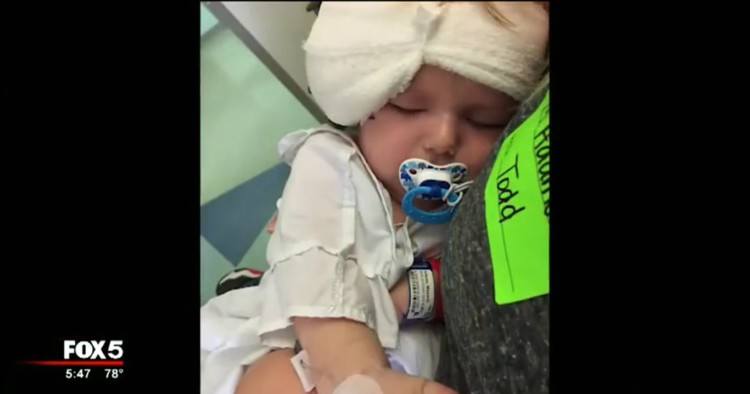 Fox5 Atlanta
With children who are profoundly deaf like Max, if they receive a cochlear implant they will still need to develop auditory and language skills. In October 2016, Max received his surgery. However, it was an uphill battle as Randy was not on board with the idea.

He felt that Max was fine as is and didn’t agree with changing him. After both parents conducted their own series of research sessions and multiple discussions, Randy hesitantly agreed to the surgery. The procedure was successfully done at Children’s Health Care of Atlanta, and little Max could now hear sounds. Beautiful!

Michelle notes the difference the implants have had on Max’s life and how being able to hear has changed his personality:

“Before that he’d not been responsive at all. It was just like he was bored all the time. He was a different baby when he could hear.”

Seeing the change in Max convinced Randy that perhaps the surgery would be a blessing for him too. Months later, Emory University Hospital performed Randy’s surgery for cochlear implants which were activated this past March. Grab some tissues and watch the emotional reaction when he hears Michelle’s voice for the first time!

Since Randy is an adult, it will take a while for his brain to develop the ability to process sound. It’s a new process. As for now, he’s totally excited and open to new possibilities. It’s a complete 180 turn from his position on Max having the surgery. We’re excited for the both of them to be on this journey together!

What do you think of Randy and Max’s heartwarming story? Do you know someone who’s lived with a hearing or vision impairment? Share with us in the comments!