What are you most self conscious about? Typically the things that we try to cover up most—be it a crooked tooth or an oddly shaped mole—are things that no one else even thinks twice about.

Case in point: Scars. Scars are totally normal and common, but those who have them are typically pretty embarrassed about how they look.

One little girl who has a scar on her neck is totally ashamed of it. The scar is a result of a surgical procedure she underwent in an effort to repair Chiari malformation, a condition in which brain tissue extends into the spinal canal.

The girl actually had to have her skull cut open in order for doctors to vertebrae in half and add a Dura patch around the brain. Poor girl—but we think it makes her a champion nonetheless.

Unfortunately, she doesn’t think so. The girl couldn’t bear to wear her hair up for the world to see the mark. In fact, she always leaves her hair down to cover it up and pretend it isn’t there.

Her father, Justin Brower, knew he had to do something about the situation. So in an effort to make her change her feelings on her scar—from a bad thing to a pretty cool thing—he went to twitter for help.

“My daughter (12) doesn’t wear her hair up because of her scar. She thinks it’s ugly and afraid of what people will think. I think it’s badass,” he wrote on his page. “Can you please show her that her daddy’s not the only one that thinks so. Likes and comments (and RTs) super appreciated! Thanks!”

The tweet immediately went viral, racking up over 60,000 shares and over 223,000 likes. People from all over tweeted loving words for the little girl to embrace the scar. 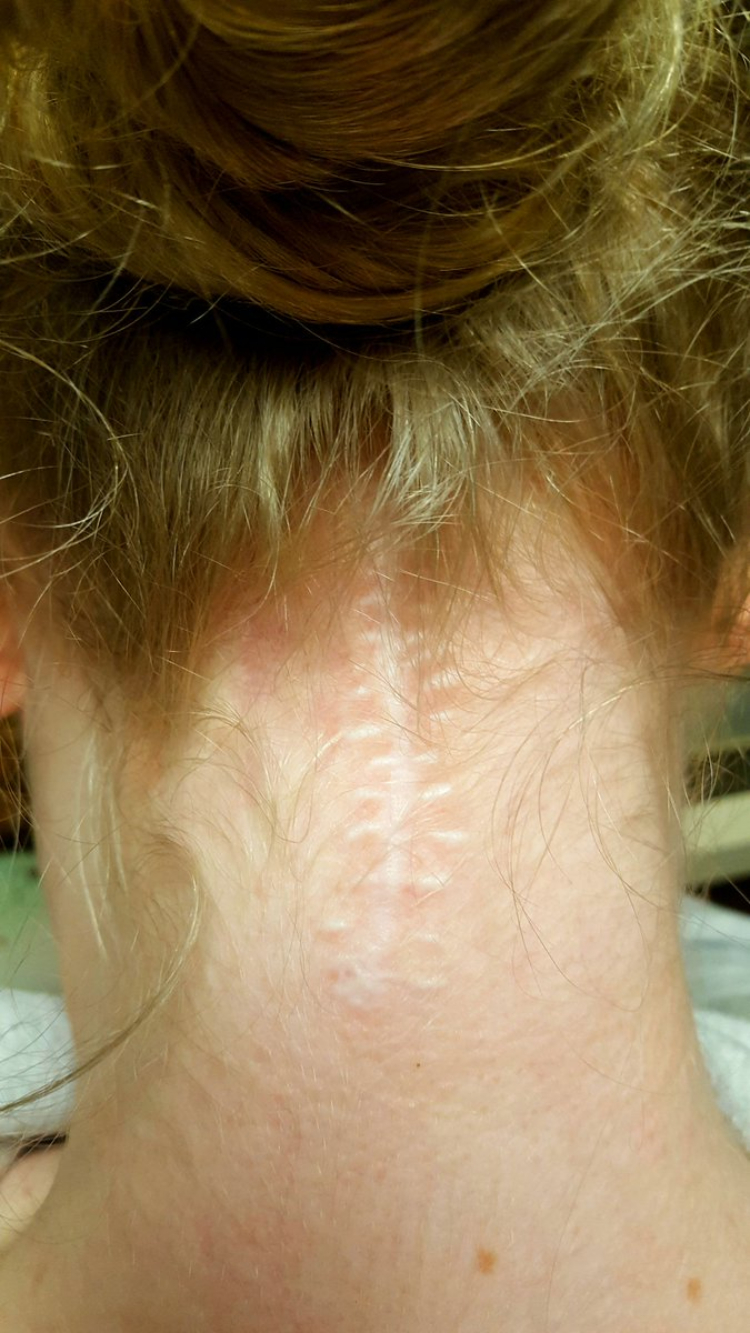 “Scars are a sign of strength both physically and mentally. it shows she’s a warrior. it also looks really cool!” someone wrote. “People who have something to say aren’t worth your time. Put your hair up and show off that rad scar girl!”

Some shared the things on their bodies that they were ashamed of. “I don’t have a scar but I was ashamed of my hand. I had bullies in school who made fun of me. I wore long sleeves/hoodies to cover my hand even in the summertime. I was given some encouraging words. Here I am tweeting it. Embrace it. You’re beautiful! Totally badass!” one woman wrote.

Perhaps one of the most popular responses were people sharing photos of their own scars—some even on the same spot on the neck!—so she wouldn’t feel so alone.

Brower was blown away by the positive response. “A sincere thank you for all your support and stories of your own scars. It all helps,” he wrote.

“I’m thankful and privileged that we have access to good healthcare. Not all in the U.S., or the world, do,” he added. “While her condition isn’t necessarily life-threatening, more of quality of life, a scar really is a first-world problem when there are so many that can’t get the surgery.”

Is there anything on your body you used to be ashamed of, but now embrace?