Discovering a loved one has dementia can be a struggle not only for the patient, but for family and caregivers too. Once you recognize the signs of it and it is properly diagnosed, there is a learning curve for everyone involved.

It is a heartbreaking condition. If you know someone with Alzheimer’s or another form of dementia, then you know that it is necessary to change how you communicate. A recent post on Reddit sparked a deep discussion among caregivers, families, and friends of people living with dementia.

An anonymous poster shared the photo below with the following caption:

“Words of reassurance left for an elderly lady with dementia by her daughter. A simple white board left in her sight line in her sitting room. Helped to reduce constant anxious phone calls.” 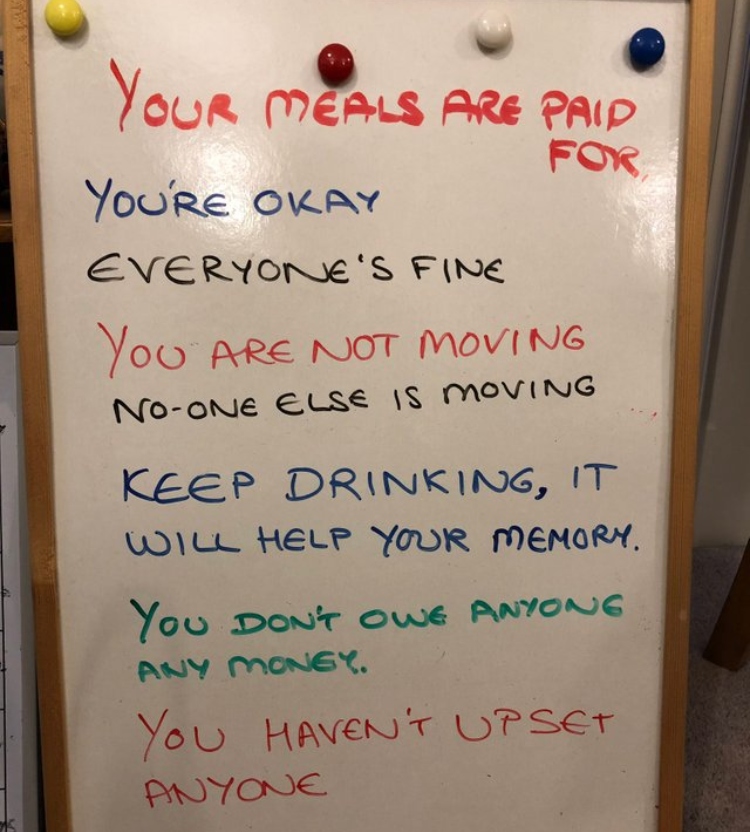 While praising this idea, some commenters chimed in with their own experiences and advice. Some were sad, and others were reflective of the last few memories spent with their loved one. Comments included:

“That’s awesome! I had a resident that always asked for the bill after meals. I would tell him I got it this time, next time you pay. Then he would offer to help pick up dishes and clean up dining room. He was a great guy.”

“My grandfather ended up in a secure unit when he had dementia, as he tried smothering one of the other patients in his care home.

He was in the British Royal Marines fighting the Japanese during the second world war, so when he was moved to the secure unit, he naturally assumed he’d been captured by the Japanese.

His first successful escape from there he took out two security orderlies (they survived but were injured) and scaled a 10 foot concrete wall to escape, he then surrendered to police when he saw they were British police uniforms.

I know he did other things but my parents tried to hide it from us kids. Unfortunately we didn’t get to see him very much at that point and he passed away not long after.”

Some shared what other reminders they would add to such a list:

“Water. Many patients with dementia forget to drink water and are very dehydrated. Being properly hydrated helps the brain work properly. It’s the most awful of diseases truly…”

“Your cousin died 10 years ago. Your aunt and uncle don’t live next door. They died 30 years ago in Wisconsin.

That’s your daughter in the other room. She didn’t kidnap you.

You are home. You’re talking to me on your phone in your kitchen. (My number is on the white board… 911 was getting the kidnapping calls)”

Another poster who works with dementia patients offered some suggestions to assist those with caregiving duties. Redirecting the person’s attention to an activity like folding laundry, playing music, drawing, or coloring helps, as does taking care of a doll. It was also recommended to take the person on a short walk around the premises to get their mind off what they were worried about.

The Alzheimer’s Association is one organization that offers support resources for caregivers and patients. They point out that it is important to understand the various stages of dementia and what to expect during each phase, as well as the need for partnering with health care providers to offer the best care.

The sweet gesture by this daughter to comfort her mom is one meaningful and practical way to help with everyday occurrences. If you are coping with dementia in your family or immediate circle, we encourage you to share some of your tips too.

What are your thoughts on this white board sign? Are you dealing with dementia in your family? What are some of the ways you handle communication and everyday interactions?