They say things happen for a reason, and that saying couldn’t hold more true for Jane Fine Foster. This Colorado native just happened to be in downtown Grand Junction, Colorado, when she walked by a thrift store called A Robin’s Nest. Jane hadn’t planned on going inside the antique shop — that is until she saw something shocking in the storefront window.

“I kept blinking and looking again, like, can this be?” Jane told WNYT News. “But of course it could be, it was, it is my mother.”

There in the window of A Robin’s Nest was Jane’s mother’s 1948 wedding photo shining in the shop’s display. Naturally, she went inside to look at the picture for herself, reportedly “held the picture tight to her” overcome with emotion by the find. That was when she would make an even bigger discovery. 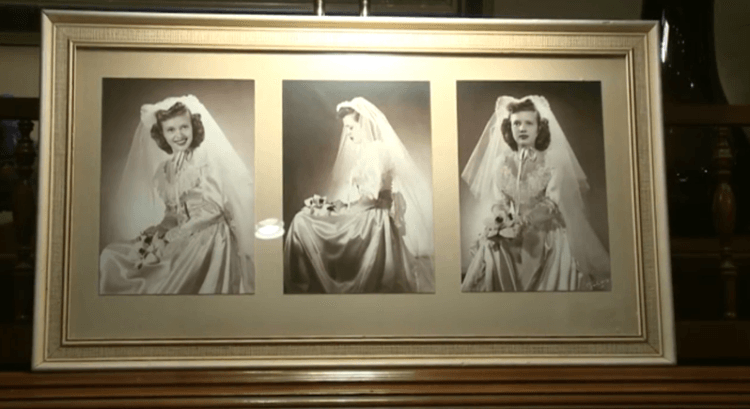 WNYT News
After looking around the store for a moment, Jane laid eyes on something even more amazing: her mother’s wedding dress. The gown was hanging in the store, still wrapped in pieces of newspaper dated June 22, 1948. This was only two days after her mom’s wedding. One of the headlines on the paper reads, “Truman Holding Strategy Meetings”, making us and Jane feel like we’ve traveled right back through time.

“To say I was shocked, stunned, near paralyzed is the understatement,” Jane explains. “I actually screamed out loud.”

She asked the store owner, Shane Allerheiligen, how much the dress would cost her. Once he realized that the woman in the photo and owner of the wedding dress was Jane’s mother, he told her there was no price for this dress because it has made its way back home to her.

As it turns out, the photo and dress were auctioned off because the family missed a payment on the storage locker holding the family antiques. That was over a decade ago. Through some miracle, the dress and photo got safely to A Robin’s Nest, and Shane was just glad to give the wedding dress back to its rightful owner. Jane, who never knew the story of the dress or photos, is overjoyed to have the memories of her mom come back into her life.

The coincidence of it all is still incredible to Jane.

“Why would I be downtown and just happen to be in that block and happen to see it? It just boggles my mind.”

What do you think of this incredible story? Share your thoughts on Jane’s amazing discovery in the comments section below.