Dashcam Footage Captures a Baby Crawling Across the Highway

Have you ever found yourself driving along the highway, bumping up the radio station, and then all of a sudden you come to a screeching halt when there’s a deer making its way across the street? Of course, you have. But what about a toddler?

Unfortunately, we’re not kidding about this one. It’s a thing that happened recently. On March 13, 2018, Quang Ninh was driving along a highway in Vietnam when all of a sudden he spotted a literal child crawling across a busy highway. We wish we were making this up, but alas, there’s video footage to prove it.

Quang did what (we hope) most people would do: Immediately hit the brakes and get out of his car to save the baby before it was hit by an unsuspecting vehicle. Can you imagine?

The weird part is that right when he got out of the car to help, another person came running from the opposite side of the highway, hopped the barrier, and picked up the child. The woman then ran off to the opposite side that she came from with the child in tow.

Quang and his passenger looked at each other confused, but of course, had to hop back into their car. They were, after all, stopped in the middle of a highway.

“I was driving on the road and I suddenly found that a baby crawled across the road. Luckily, the baby was not harmed,” Quang told the Daily Mail. 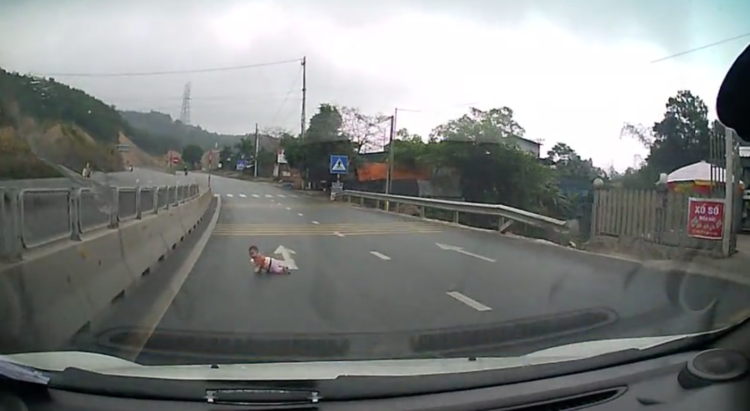 While this is certainly a bizarre incident, it unfortunately isn’t the first time something like this has happened.

In 2014, a man named Bryant Collins stopped his car when he found a baby crawling across a busy roadway in Georgia. Later it was determined the baby had crawled through the woods, 300 yards from home, and nearly onto the highway. Thankfully, that child wasn’t hurt either, but the parents were later arrested.

A more recent and similar incident occurred in 2018 when a video emerged of a baby crawling alone after dark on a road in upstate New York. The mother of the child, identified as Ford, had claimed that she had buckled the baby into the backseat of her car, and the next thing she knew, he was gone. She had no idea how he ended up in the street. She later had her four children removed from custody.

Additionally, there’s a disturbing amount of videos of babies crawling unattended in streets and highways.

We guess the saying is true—if you take your eyes off a baby for a second, anything can happen. So keep your eyes on your child at all times so they don’t get into any mischief, or find their way outside onto a busy road!

You can watch the recent incident in Vietnam, which was captured on Quang’s dash cam footage, below. To date, there hasn’t been any further information on the incident of how the baby ended up in the street.

What do you think of this disturbing video? Have you ever had the unfortunate event of finding a human being in the middle of the street? If not, what would you do if yo did?