Previous projection mapping shows included “The Nighttime Lights at Hogwarts Castle” and “The Magic of Christmas at Hogwarts Castle,” which went off without a hitch. But according to Universal Orlando, this one will “bring more intense tones and drama that reflect the Dark creatures and wizards that challenge goodness in the Wizarding World.”

“Dark Arts at Hogwarts Castle” will feature some of the, you guessed it, darkest creatures and villains from the Harry Potter series, such as Lord Voldemort, Dementors and Death Eaters, all coming to life on the building that normally serves as the Harry Potter and the Forbidden Journey ride.

“Guests will be asked to summon their inner strength and bravery in the face of the all-consuming Dark Arts as some of the awe-inspiring moments and creatures inspired by the films come to life within the majestic light display,” the park said in the statement. 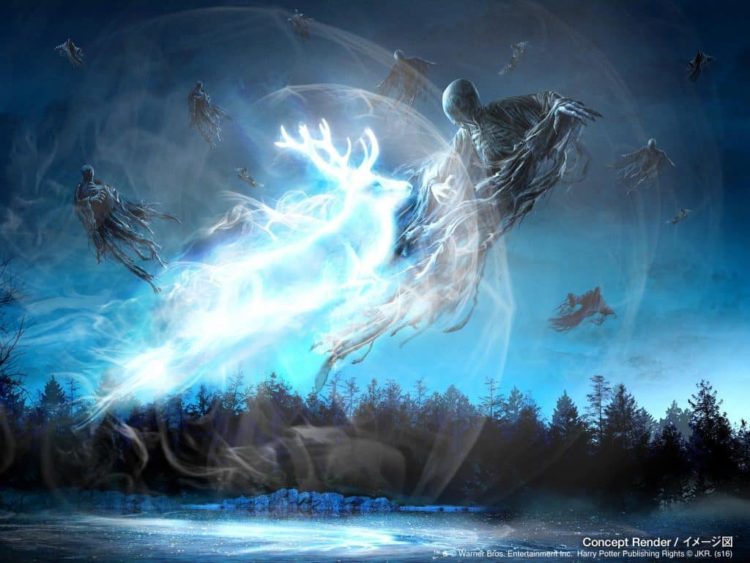 “As darkness falls on Hogwarts castle, Dementors™, Death Eaters and other unspeakable creatures from Aragog and Mountain Trolls to Thestrals will cloak the castle with sinister images from the darker side of magic—even conjuring the visage of Lord Voldemort™ himself, until the Patronus spell—one of the most famous, difficult and powerful defense of the Dark Arts charms in the wizarding world—is cast,” Universal stated.

There will also be an exclusive musical arrangement that will accompany the light show to help bring it to life. Conducted by William Ross and recorded by the London Symphony Orchestra in London, the music will be based on the original “Harry Potter” movie scores composed for the film.

This is truly not a show you want to miss, especially if you’re familiar with and love the Wizarding World of Harry Potter already. Fans love it for its snow-capped roofs, cobblestone streets, and all the “historic British sensibilities” that truly make it feel like you’re taking a walk inside the Harry Potter books.

Only problem is, dates of the show in Orlando have yet to be released! However, we do know that the same show will be produced at the Wizarding World attraction in California from April 13 to April 28, and May 25 to May 27. Admission to the show will be included in regular Islands of Adventure admission.

You can visit www.UniversalStudiosHollywood.com for more details and updates in the future.

Are you a big Harry Potter fan? Have you ever been to the Wizarding World of Harry Potter? Are you interested in seeing the Dark Arts at Hogwarts Castle projection show?