It’s no secret that losing weight can be tough, especially if you have a lot of pounds to shed. With that being said, we’ve seen so many inspiring stories of fitness success, we are inclined to believe that a healthy size is totally achievable, especially if you focus on adopting a positive attitude.

Thirty-two-year-old Pasquale “Pat” Brocco is quite possibly the best example of how this notion can completely change a person’s health, look, and even life expectancy.

You see, the social media superstar used to be so obese that he had to give up an exciting career all because of his dangerous eating habits.

On the Ellen Show, the gentle giant explained that his weight originally spiraled out of control for a rather surprising reason. Pat used to be a bodyguard, and a successful one at that— he even worked to protect some notable artists and athletes.

He says that he was basically employed because he was “big.” Because Pat was known for his size, he felt that his success was connected to the way he looked, a reality that would make anyone wary of making a change. 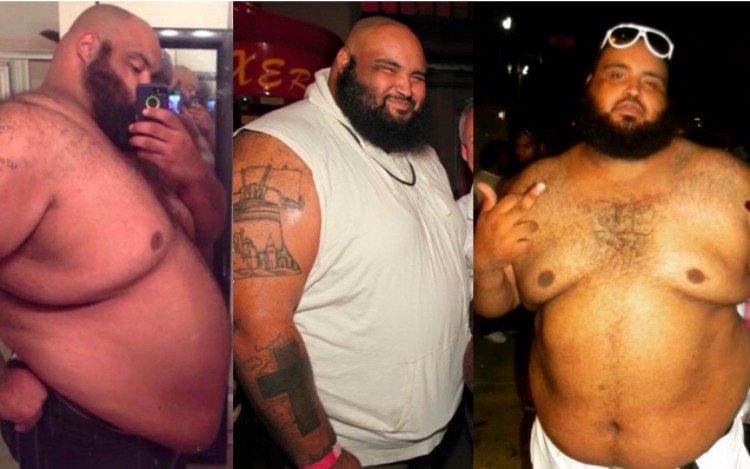 Why he dropped the pounds

When 6-foot-8 Pat was at his highest weight, he was tipping the scales at over 600 pounds. Although the guy IS rather tall, his size ended up becoming a huge burden on both his health, as well as his business.

You see, Pat got so big that he wasn’t even able to perform basic exercises, a fact that affected the former body guard tremendously. “I’m in a room with people I’m supposed to protect, and there I couldn’t do one push-up,” the guest remembers.

After a particularly embarrassing experience, Pat made the hard decision to leave his job so that he could focus on getting back into shape full-time.

Soon after his departure, the guest had a pretty scary doctor’s visit where he was diagnosed as having high blood pressure and being pre-diabetic. That’s when the former bodyguard kicked his weight loss plan into high gear.

Pat started off slow and steady, by simply taking a walk to his local Wal-Mart every day. He told Ellen that every time he felt the desire to eat, he would leave his house and start his mile-and-a-half trek to the store.

When he first started on his weight-loss program, the guest admitted that the journey would usually take him about an hour-and-a-half both ways. He would then buy the ingredients for each individual meal before beginning his walk back home.

With dedication like that, it’s no wonder that, within the first 60 days, the motivated guy lost an astonishing 90 pounds! From there, the weight just kept on melting off until he finally reached his goal.

These days, the altruistic muscle man is focused on giving back to others who are trying their best to shed those extra pounds. He uses social media to reach out to his would-be protégés, and even has a desire to move into personal fitness coaching in the future. Talk about giving back!

To see this special guest, 300 pounds lighter, be sure to click on the video below. Way to go, Pat!

What do you think of Pat’s incredible story? Have you lost a substantial amount of weight? If so, how did you do it? Tell us all about your thoughts and experiences in the comments section below!