You Have to See This Incredible Daddy-Daughter Carpool Duet

When it comes to fun, it’s safe to say that most dads have the process down pat! Whether it’s an unexpected swimming session, a living room dance party, or even a cupcake theft interrogation, plenty of pops know just how to infuse some much-needed fun into any situation.

So, in honor of all of the funny dads out there, we are going to share one of the most inventive – and precious! – viral clips we’ve seen recently. This one will make you want to dance!

The video starts off with a blond papa sitting at the steering wheel of his car, with an equally blonde 4-year-old in the backseat. The scene, in and of itself, is just adorable; these two look practically identical!

All is status quo until the little girl asks the driver a question. “Hey, Dad?” she says. “Wanna listen to the radio?”

“Sure,” her dad says. Who could possibly refuse a cute face like hers, anyway?

He reaches to flick on the radio, then something REALLY amazing happens—the two are instantly transformed into country singing divas, hot pink headbands and all! 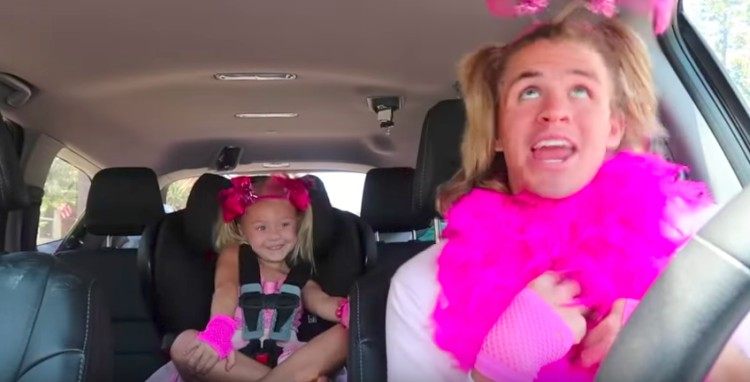 Cole&Sav
From there, the two go through a tour of different musical stylings, hitting everything from metal to rap to pop—with outfits to match each and every genre. Talk about creative!

If the two-thirds of this adorable family seem familiar to you, then you’ve likely seen one of the videos from their YouTube channel, Cole&Sav, before. The channel, which focuses on Cole LaBrant’s (the dad in the video) and Savannah Soutas’ (the girl’s mom) new marriage, as well as their raising of Everleigh, Savannah’s daughter from a previous relationship.

Believe it or not, both members of this young couple have been respectively well-known for the past several years, with Savannah being a prominent fashion blogger and Cole having risen to social media mega-stardom after being featured in countless comedy clips on both YouTube and Vine.

While the family is clearly no stranger to attention, this hilarious video may just be the one that launches them to legit celebrity. After all, it has already nabbed them several millions of views and shares since it was posted last month, with countless fans gushing about their charismatic performances.

And although the daddy-daughter duo is already “YouTube famous”, they have loftier goals. You see, Cole’s aim is to have this clip featured on The Ellen Show. The host certainly IS known to feature cute, homemade videos like these, so we think that they may just have a chance!

Now that you know all about this father and daughter team, it’s time to see the hilarious video for yourself. Just click on the clip below to witness some serious daddy-daughter goals in action. It doesn’t get much cuter than this!

We’d love to hear your thoughts on this dynamic duo! Are you a fan of this family’s YouTube channel? If so, what is your favorite video of theirs? Do you like to do creative activities with your little ones?