Here in the U.S., it’s customary to leave tips for wait staff in restaurants. Tipping has been a subject of contention, debate, and articles printed all over. What’s fair, what’s necessary, and what’s proper etiquette have all been up for discussion.

Prompting yet another hot debate on tipping was a recent post made to Reddit entitled “The Libertarian Way to Tip”, which gathered close to 2,000 replies. A picture of the “tip” left for a server at Del Rio restaurant in Joplin, Missouri was shared by a Reddit user.

When the unidentified diner received his bill, he filled in the tip line with a “0”, scribbled “Taxation is Theft” in the space and left a little over $7.00 in cash. On a separate piece of paper, the man wrote a note:

“This is not a tip. This is a personal gift and not subject to federal or state income taxes.” 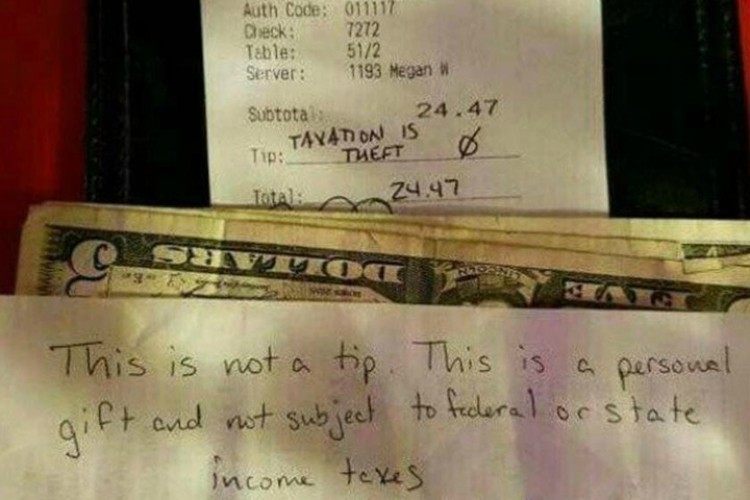 Breaking the tipping norms hasn’t been all that unusual over the past few years, with some servers getting high amounts of surprise tips from generous patrons. But the way this tax-resenting guy left advice and money really hasn’t been seen or publicized before.

In Missouri, tipped employees receive half of minimum wage, amounting to $3.85 per hour. But by the same law, if an employee doesn’t earn enough tips equal to the full amount of $7.70 per hour, the employer has to make up the difference.

In an industry where the financial struggle can be very real for tip earners, the gesture seems welcome, even if it comes with a dose of caution. Among the racked up opinions on Reddit are users who think the diner was clever, and those who think he’s advising the server to commit tax fraud. What’s a waiter or waitress to do?

Some Redditors who work as waiters or waitresses piped in to say that they prefer to claim all of their tips as income for their taxes. There were some who amusingly stated that they consider all their cash tips to be personal gifts. Other folks, well— they get, um, “creative” with their accounting.

Part of the question comes with what’s considered a gift. As far as the IRS is concerned, $14,000 is the cap amount for an untaxable personal gift. But would this legally qualify? The onus would rest on the recipient to prove that it does, but judging from this particular situation, it was left in a place of business in return for services received. Not so much a gift, but a tip?

In an article with ATTN:, an IRS spokesperson declined to speak on the legal implications of this “personal gift” versus tip income. Instead, they were referred to the IRS guidelines outlined in the “Tips on Tips” publication which clearly states that tip income is taxable. There you have it.

What are your thoughts on this personal gift? Do you agree or disagree with this customer’s stance? What would you do if you work(ed) as a server? Tell us in the comments!