Ah, Costco. It’s one of our absolute favorite stores. Not only because of the various free samples and their infamous $1.50 hot dogs, but because of what they’re known for selling.

If you don’t know, Costco is known for their huge bulk items, and for the massive discounts you get from them. Because you’re buying in bulk, Costco is able to sell you ten times the product you want, but for much cheaper than if you’d just buy one of them. It’s a pretty sweet deal.

And while bulk diapers and massive jars of tomato sauce are great, what we’re really after on a trip to Costco is some bulk dessert. We have a major sweet tooth, so we love perusing the aisles for cookies, brownies, ice cream, you name it. If it’s dessert, we want it.

And in Costco’s case, the bigger the better. Lucky for us, Costco has offered their fair share of some pretty eye-widening desserts fit for a king—or a few kings.

For example, remember their 3-pound cookie? A classic delicious treat, twelve times the size of how it normally comes. And let’s not forget their 5-pound Harvest Spice Cheesecake or the annual 4-pound pumpkin pie, both of which make their way into aisles each Thanksgiving. 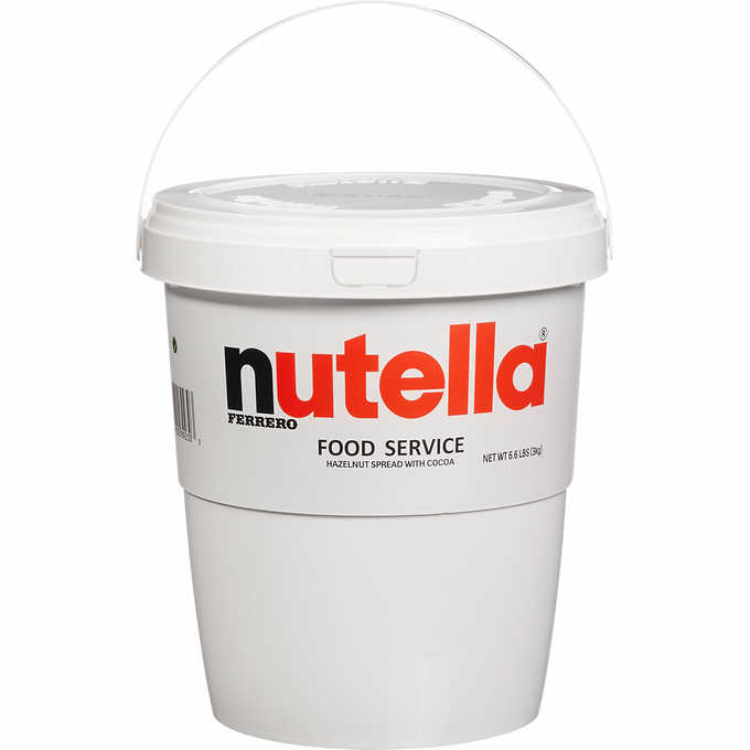 But these desserts are all amateurs compared to the newest multiple-pound treat the warehouse just released. This new dessert is bigger (much bigger) and better than anything we’ve seen before.

Nutella is by far one of our favorite desserts, so this is a true dream come true. The creamy, chocolately hazelnut spread tastes amazing on anything—from fruit to pretzels and just a plain old spoon out of the jar.

Just so you can compare, a standard jar of nutella is 13 ounces. A typical serving size is 37 g. In your typical 13-ounce jar, you get about 10 servings of the stuff (well, pending you actually eat the serving size, which is pretty dang hard but I digress).

In the nearly 7-pound jar of nutella, you end up with 81 servings. 81 servings of pure nutella bliss! That’s the equivalent of more than eight jars of your normal-sized jar.

It’s a great deal financially too (of course). The massive nutella jar only costs $22, whereas a standard jar will run you about $4. So if you’re constantly buying nutella, this will save you money in the long run.

The best part of all is that not only is Costco selling the giant nutella jar in store, they’re also selling it online in case you don’t live near the chain. And for just $3 for 2-day shipping, it’s totally worth it. Excuse us while we go order several jars!

To order the 6.6-pound jar of nutella, head to their website. They just won’t ship to Puerto Rico, Alaska, or Hawaii.

Are you a nutella fan? Would you ever purchase this colossal sized jar of the hazelnut spread from Costco? How long do you think it would realistically last you?