Inside Edition
Officer Jody Thompson and his wife already had three kids of their own in their hometown of Poteau, Oklahoma — but they had no idea that in 2015, they were going to unexpectedly be adding a new member to their family.

It all started when Officer Thompson heard a call child abuse on his radio. He quickly arrived on the scene to see if assistance was needed and walked in on a horrific, heartbreaking sight.

Officer Thompson was shocked to discover a scared and confused 8-year-old boy bound by his hands and feet with rope, shoved inside a trash barrel. He was starving and covered in bruises. The boy had reportedly been held in the shower against his will and was soaked to the bone.

At that moment, Thompson knew that he could never leave the boy’s side — he was instantly drawn to him.

The boy, John, was rushed to the hospital in somewhat critical condition. All along, Officer Thompson remained by John’s side while he recovered in ICU and the two of them hit it off right away.

Almost immediately after John was healthy enough to leave the hospital, Thompson and his wife did something incredible: they adopted John into their family. 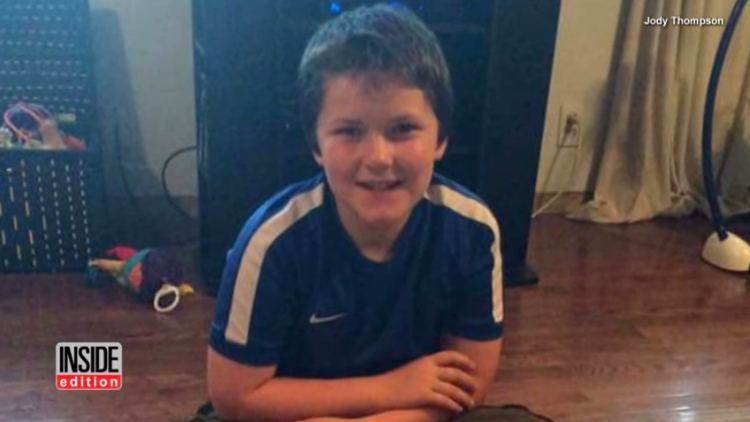 Two years later, John Thompson is a straight-A student and in the gifted program at school. His new family has helped him heal the wounds his biological parents inflicted on him, and the now ten-year-old boy is now getting all the love and care he deserves.

But the story doesn’t end there. While going through the adoption process with John, the Thompsons found out that John’s biological mom gave birth to a baby girl while in jail. Without hesitation, John’s new parents went right to the hospital and picked up the newborn — she wasn’t even 24 hours old yet when her adoption paper got started.

When KFSM Fort Smith reported on the touching story, the interviewer asked Officer Thompson when he knew that he was looking at his future son:

That bond between them is crystal clear. The way the father and son look at one another, you can tell that there is so much natural love and admiration for one another, especially from John. John told reporters that “he’s [Officer Thompson] is the reason he’s here right now,” which is a hauntingly true sentiment.

Now, the Thompson family has two new members who they took in during their time of need. We can’t help but grin reading this story, knowing that this awful situation has such a happy ending!