Houses act as vessels for a lot of precious moments, and even secrets. It’s so easy to get wrapped up in the comings and goings of life that it’s not often that we think of homes in this way. Nonetheless, if they stand for many generations, they hold something special: history. Take this house, for instance; one man actually came across an object that ended up defining a family and an era.

A north Phoenix contractor named John Murray was performing a routine job with his crew on a 1950s home when he made quite the discovery. “We’ve done hundreds of houses; I’ve never seen anything like this,” he said.

Nestled in between walls that he and his guys were tearing down was a time capsule. If you’re unfamiliar with this contraption, just think back to your elementary school years when most first make them. People usually add in small relics that they feel signify their current time. In this partially-opened one, Murray found contents dating back 50 years.

Inside were photos of a happy family along with letters signed by a Betty Klug. Intrigued, the contractor read through all of her included materials, and quickly realized that he just had to find this family.

But, before we dive into the emotional meeting, let’s first take a look at one of the letters for ourselves. In one snippet, Betty gave her take on the current state of the country:

Vietnam War is still going on. Racial situation very serious. Boys have long hair resulting from the Beatle craze. We are sure truth and love will prevail and the constitution will remain.

Wow! Did you get chills up your spine too? It’s one thing to learn about the public sentiment in history books, but it’s another thing to actually read it in someone’s own words. Amazing stuff!

Luckily for us, NBC Nightly News was able to capture the meeting between Murray and Betty’s widower husband, 79-year-old Bruce Klug, at a local coffee shop. Bruce told cameras that he was completely unaware of his wife’s time capsule. 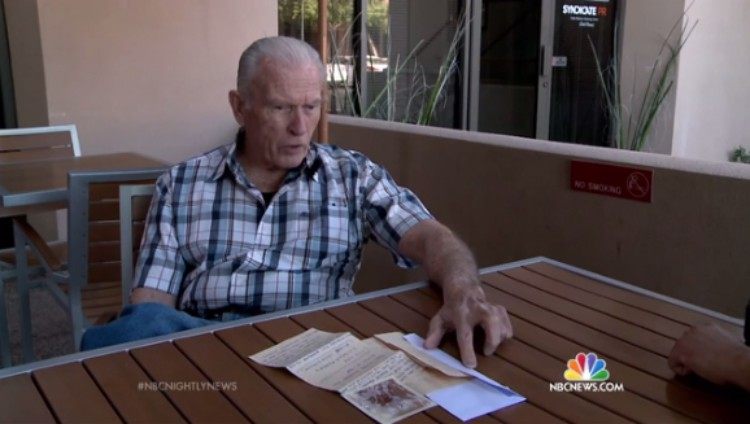 As he read through the material, the man was able to shed some light on the contents of the letter. He explained that his wife was very invested in politics. It’s amazing to think that, though her letter was written back in 1966, so many of her hopes for the future still ring true in current times!

At the time that the capsule was made, Betty would have been 33 years old, a mother to two grade school children. Sadly, just a mere ten years later, she would be dead, having suffered fatal injuries from a car accident.

On her untimely death, Bruce recounts just how painful the ordeal was. Allowing the tears to fall, he remembers, “I don’t know how I did it. Went back to work within a week.”

It’s obvious that the man just adored his wife. He remembers her as being, in his words, “so damn smart.” “We had the best marriage,” Bruce explains, “Not once did we argue about anything.” How absolutely heartbreaking that he had to continue on without her.

The contents of this time capsule are truly amazing. I think it’s motivated me to make one myself! To see more of the included articles, as well as Bruce Klug’s reaction to reading his late wife’s letter, be sure to watch NBC News’ video below!

What do you think of this contractor’s amazing discovery? Have you ever come across a time capsule before? If so, what was included inside of it? Tell us all about your thoughts and experiences in the comments section below!