The Crazy Word Problem Confusing Everybody in Your Newsfeed

All right, ladies and gents. It’s time for another one of those seemingly simple (but not) word problems that’s going viral because the general public can’t seem to figure it out.

I sort of have a love/hate with these—once I find out what the answer is I’m all like “ohhhh, obviously.” But it’s so not obvious when you begin!

This one is particularly tricky because you think it’s a math problem. But it’s also an English problem. And combining math and English apparently doesn’t make us happy. 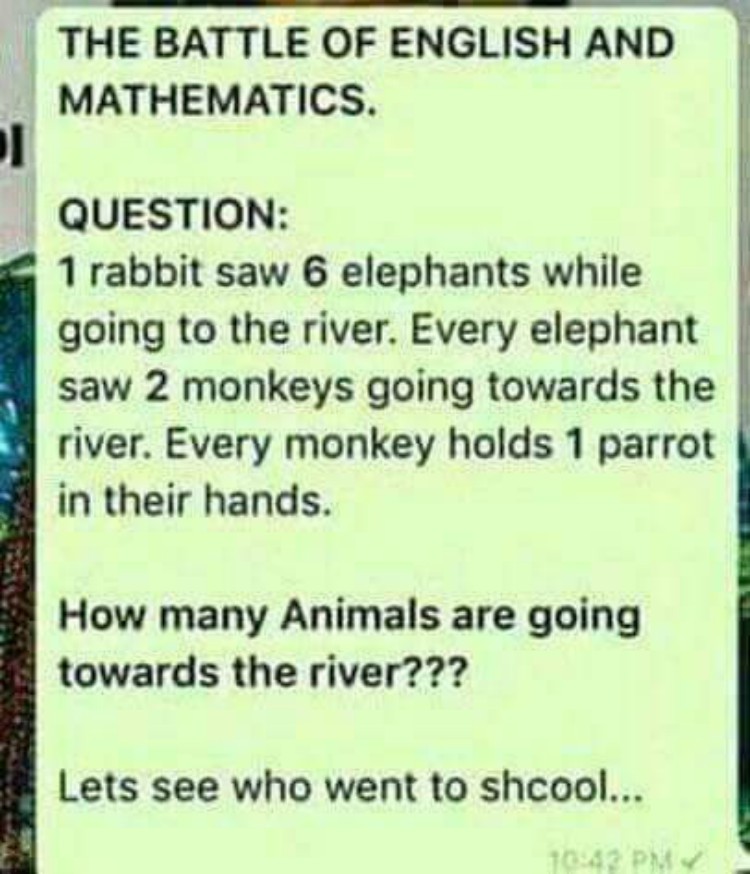 We never went to “shcool,” but we’re still determined to figure this out.

Because we’re nice, we’re going to give you four choices for answers so that you can rest assured it has to be one of these:

Can you figure this out? Let’s walk through some scenarios together— or at least, what went through my brain as I spent way too much time in my day trying to figure this out.

So we have a rabbit, right? And said rabbit sees six elephants on his way down to this river. Each of those elephants see two monkeys. And each monkey has one parrot.

Then I took it back a notch. Maybe each of the elephants saw the same two monkeys? I’ve totally got it now. So one rabbit, plus six elephants, plus two monkeys, plus two parrots (one for each monkey): that means the answer is 11!

Except 11 still isn’t an option. I have now broken out a pencil and a pad of paper to try and get to the right answer.

One rabbit. Sees six freaking elephants. Every elephant saw two monkeys. And every monkey is holding one parrot.

Now I’m starting to daydream, wondering if the rabbit has bad eyesight? Maybe he was up all night drinking and seeing double (or triple) elephants? Maybe it’s only two elephants who saw two monkeys? In the case of my drunken rabbit scenario, we get 1 + 2 + 2 + 2 = 7. Which also is very incorrect.

At this point I’ve given up, like the rest of the world, and watched the video below to figure it out. Cue the “ohhhhh, obviously.” It all makes sense. It’s annoying, but it all makes sense. Now I can’t unsee the answer, and can constantly get to it. Sigh.

If you’re struggling like I was, check out the video below, which explains how you get to the answer, and why the answer is correct. Hint: Don’t think so much. None of the animals are drunk. Just read the problem carefully, and get to it.

Did you get to the right answer before watching the video? Or did you give up, watch, and smack your palm to your forehead?