People embarking on weight loss journeys often buddy up with someone who can help them stay motivated, be accountable, and for extra help. It’s a wonderful way to gain support.

When that buddy ends up being someone close to you like your significant other, it’s all the better! Married couple Amber and Bo decided to jump into a new fitness plan together when they realized they weren’t happy with their health.

On Rachael Ray’s show, the two explained how they did it. Bo and Amber wed in 2013 and sometime after getting settled into married life, they noticed the pounds were adding up. Amber says that once she got pregnant and gave birth, her pregnancy eating habits didn’t change.

It was hard for her to drop the “eating for two” ways, and at her most, she weighed 363 pounds. Bo packed on the pounds too – up to 357 pounds – which led to them both feeling out of whack and under strain. Some of the sparkle in their marriage faded, and their health, relationship, and finances suffered.

Since this wasn’t the path they wanted to stay on, the duo began working out and making dietary changes. Out went the red meat and in came the ground turkey. They added more fruits and vegetables, as well as a fitness routine, and the weight started melting away. Collectively, they lost over 300 pounds!

But then Bo and Amber had a new challenge to tackle: loose clothing. As with most people who have lost a ton of weight, their clothes stopped fitting properly. They reached out to Rachael’s team with their weight loss story and were invited on as guests for makeovers. 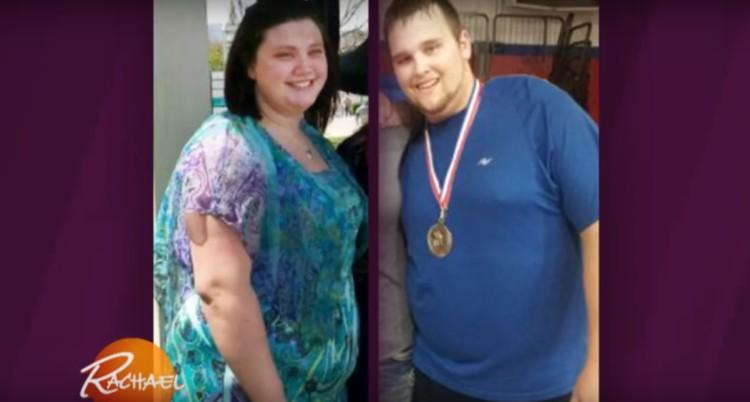 In this video, Rachael and style expert Gretta Monahan dish on how hard this husband and wife worked to get in shape. Excited to make them over, they send the duo backstage to get transformed. Not only were they separated and couldn’t each see other during the process, but they couldn’t look at themselves in the mirror either!

That meant that the audience would get to see them first. You are part of that audience too! Click below to see Bo and Amber’s before and after looks for their makeover. First, they’re revealed to each other and can’t stop smiling at one another. Their reactions are priceless.

New haircuts, outfits, and leather jackets scream rock-and-roll style. Bo could compete in a Chris Pratt look-alike contest, and Amber’s hair is a complete 180-degree change from what she was sporting. What you don’t get to see in this clip is that Rachael and her team had more in store for the couple.

Amber was given a $2,500 gift for Lulus to go towards a new wardrobe, and Bo received the same amount to shop at Bonobos. Surprise! Anyone who’s been on their own weight loss story can relate to having oversized clothes that don’t make the cut anymore.

Achieving your fitness goals is a huge accomplishment and a fresh wardrobe is the perfect way to celebrate. These two deserved it!

What’s your reaction to this couple’s makeover? Do you have a similar weight loss tale to tell? Did you make over your wardrobe too?