Dad Hears His Son is Coming Out, So He Writes This

Huge steps have been taken for the LGBTQ community in the last few years. Just two years ago, the Supreme Court made same-sex marriage legal in all 50 states. In those two years, we’ve watched LGBTQ relationships make their way into mainstream media more than ever before and general acceptance of the LGBTQ community rise to an all-time high.

There are still steps to make, of course, but compared to a few decades ago? We’ve come incredibly far.

But despite all of those amazing advancements, coming out to your parents still isn’t an easy thing for everybody to do. Even in 2017.

That was the case with this teenage boy, Nate.

Nate felt that it was time he came out to his parents as gay, and even though he knew his parents loved him very much, he was still understandably nervous to have the conversation. For support, Nate called his friend Mike to ask for advice.

What he didn’t know was that his dad happened to overhear the entire conversation. His dad wasted no time in writing down the perfect response to his son’s phone call in the form of a note. 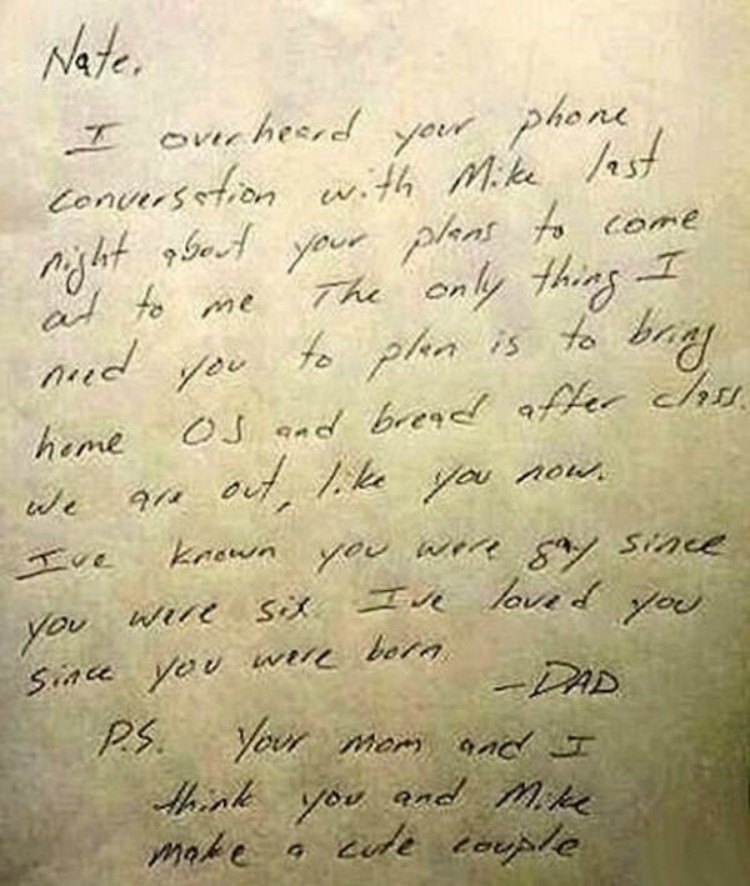 Reddit
The next morning, Nate didn’t find his parents, but he did find the note from his dad waiting for him. It reads:

I overheard your phone conversation with Mike last night about your plans to come out to me. The only thing I need you to plan is to bring home OJ and bread after class. We are out, like you now.

P.S. Your mom and I think that you and Mike make a cute couple.”

Someone posted a picture of this note on Reddit with the headline: “Every parent should be so cool; the world would be a better place.” Pretty soon after that post, the photo went viral, with hundreds of supportive comments telling similarly heartwarming stories.

There are so many things SO RIGHT about this note.

First of all, it was very respectful of Nate’s father to admit he overheard his son’s conversation. Most teenagers might resent an invasion of privacy, and we get that.

Secondly, nothing is more important in this letter than this dad telling his son how much he loves him, no matter what. That is the type of unconditional love and acceptance everyone should take note of.

And, finally, the dad joke in the form of a grocery store list. Even in this tender moment, this mastermind still found a way to sneak some signature dad humor into the situation, which is brilliant.

“The only thing I need you to plan is to bring home OJ and bread after class. We are out, like you now.”

Are you kidding? We’ll never stop laughing about that.

What an amazing example of parental love in its truest form: accepting and loving your child, no matter what. Did this story bring a smile to your face, like it did for us? Share your thoughts on this act of love in the comments section below.