Nowadays, it’s not too hard to break the internet. Whether it’s a beautiful pregnancy pic or THE Dress (we all remember the striped dress that shook everyone to their cores, right?), all it takes is one tweet to make the internet community lose it.

You might have a tendency to avoid those internet-breaking trends, but trust us, this latest one is going to catch your intention. In fact, it might just drive you crazy.

Twitter user Purp started the newest online phenomenon now known as “the coffee riddle” — and it’s trickier than it might seem.

Indy100 reports that the initial tweet, posted on November 9th, received 4,600 likes, 2,100 retweets, and 2,200 replies. Of course, the riddle has been shared on dozens of websites and thousands of Twitter feeds, so it’s spread much farther across the web since it was first introduced.

When you first take a look at this graphic, you’ll see a pot of delicious coffee being poured into what looks like pipes, which lead down to four cups. From left to right, the cups are labeled “4, 9, 5 and 7.”

The big question being asked is: which cup of coffee is going to get coffee first? 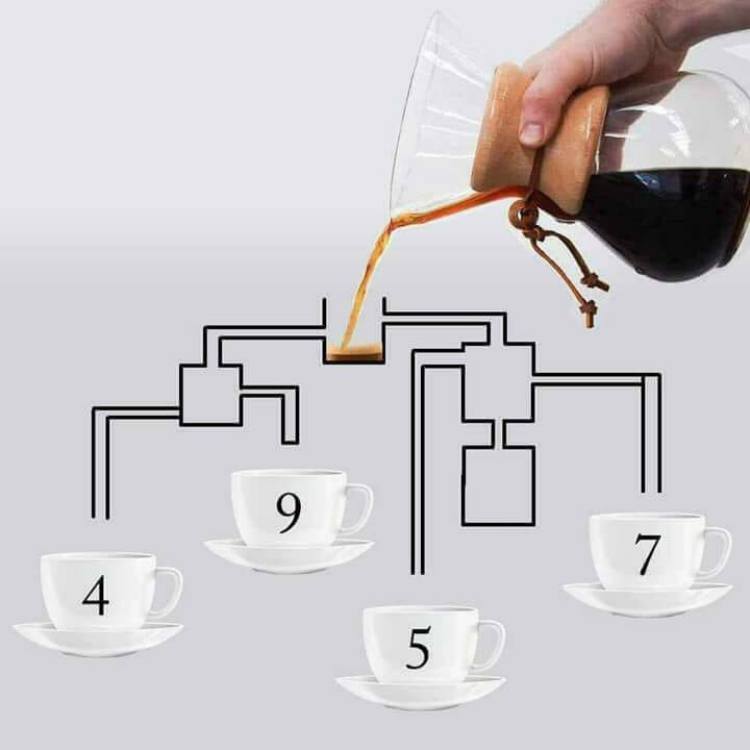 If you’re anything like us (and the thousands of people who have tried to crack this riddle so far), you might initially think cup #9 would be the first to get coffee. After all, it looks like the pipes leading to that cup are the shortest!

But then you step back and look at it a little more closely.

What we noticed next was that some of the pipes are higher on the boxes (which the coffee falls into first) and that means that the pipes connected to lower-hanging pipes would get that sweet, sweet, caffeine first. This realization changes everything.

So you might think that revelation solved the puzzle, right? Sadly, wrong! There’s ANOTHER layer to this riddle, one that’s actually ridiculously obvious — but not until you see it.

Look closer…do you see the one big detail that makes this answer clear? We’ll give you a quick hint to how we eventually solved it: let’s just say that it’s all in the cornerstone details with this one. *Hint hint.*

Still can’t crack it? Make sure to watch the video below to discover the answer to this tricky riddle!