There has been a lot of good news for coffee drinkers recently. One recent study that just came out showed us that the more coffee you drink, the longer you live (score), and now, it turns out that the morning beverage might help in reducing the risk of developing Alzheimer’s and Parkinson’s Disease.

While that’s nothing new, as there have been a few studies to suggest this to be true, this new study, published in Frontiers in Neuroscience, was the first study to research what exactly it is in coffee that can stave off the disease—and it has to do with what happens during the roasting process.

“Coffee consumption does seem to have some correlation to a decreased risk of developing Alzheimer’s disease and Parkinson’s disease,” said Dr. Donald Weaver, co-director of the Krembil Brain Institute in Canada. “But we wanted to investigate why that is—which compounds are involved and how they may impact age-related cognitive decline.”

For a little bit of background, Alzheimer’s and Parkinson’s disease are both caused by amyloid beta proteins in your body that become abnormally folded, which is why these disease are often called “protein misfolding diseases.” Got that? Researchers have now discovered that that certain coffees that may be able to stop these diseases in their tracks by hindering that protein folding process.”

So what is it about certain coffees that can cause such an adverse reaction? It all has to do with a compound called phenylindanes, which are found in some types of coffee (it has to do with the roasting process). Because deeper roasting causes higher quantities of phenylindanes, it’s the dark roasted coffee that serves the most benefits here. 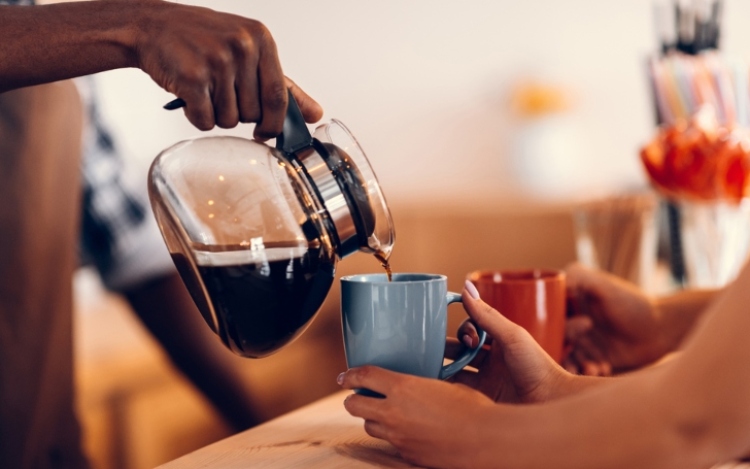 And even more good news: Caffeine has nothing to do with it, so if you’re one of those people who can’t drink a caffeinated cup after 2 p.m.—decaf dark roast coffee appears to have the same benefits.

“It’s the first time anybody’s investigated how phenylindanes interact with the proteins that are responsible for Alzheimer’s and Parkinson’s,” said study co-author Dr. Ross Mancini.

While there’s still no cure to these awful diseases, it’s definitely great that we now know about phenylindanes and the way in which they can potentially stop Alzheimer’s or Parkinson’s from developing.

“The next step would be to investigate how beneficial these compounds are, and whether they have the ability to enter the bloodstream, or cross the blood-brain barrier,” says Dr. Mancini.

Okay guys, get on that!

In all seriousness, one important thing to note is that the research is not saying drinking coffee is a cure to these diseases. “It’s interesting but are we suggesting that coffee is a cure? Absolutely not,” said Weaver. This is just one of the first steps to finally finding a cure.

All we’re saying is, it certainly doesn’t hurt to pour yourself an extra cup today! You never know what benefits it might being you later on in life.

Are you a coffee drinker? Did you know that coffee could help fend off certain diseases? What’s your favorite benefit of coffee?