This is How You Should be Cleaning Your Towels

I’m not going to lie, there are times when I pick up a dish rag, give it the “smell test,” and rack my brain, desperately trying to remember the last time that I’d washed it. And unless you’re an absolute domestic god or goddess, I bet that you do the same thing from time to time!

Because we don’t want you to be spreading germy nastiness onto your family and houseguests who use those towels of yours, we have turned to our favorite “hostess with the mostess,” Rachael Ray, to see what she has to say on the topic.

To get the full scoop on how often we should all be washing our towels, she invited a cleaning and organization pro by the name of Peter Walsh to share his advice.

Curiously enough, the expert starts his informative spiel by explaining that the towel itself has less to do with the matter than you may think! He says, “The issue is not so much the towel, it’s the wet, moist environment where there’s lots of humidity in the bathroom.”

Keeping a towel in dank places like the bathroom or the kitchen can end up leading to these two problems: 1) the towel may stay constantly wet, especially when placed on a hook and 2) the moisture can exacerbate unpleasant smells that may be living in your towels, even if they are freshly washed.

Now, it’s pretty disgusting to think about, but it’s also important to recognize the fact that harmful mold and bacteria can grow on towels, especially if they are being exposed to dampness. 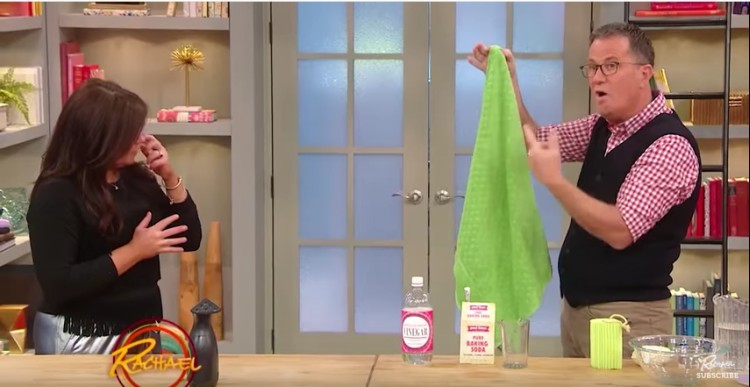 Rachael Ray Show
Nevertheless, we don’t want you to freak out too much because there’s a way to solve this unpleasant quandary! Take the first scenario, for instance: that dreaded folded towel hanging from the hook. Walsh affirms that no one should be using these contraptions in the first place as the towel can get “stuck together and doesn’t have a chance to dry.”

If you’ve been paying attention so far, then you would know that, that is pretty much the OPPOSITE of what we want to see happen!

Walsh explains that the best way to keep towels sanitary for longer is by hanging them on a towel bar. “Make sure to hang a towel over a rail so the air can circulate; that’s really important to avoid mold and bacteria growing,” he says.

As far as the second issue goes—getting rid of that stink from your towels—the expert has his own DIY concoction for tackling the issue, and, lucky for us, it only involves combining a couple of everyday household ingredients.

Now, it’s important to note that even the cleanest towels may be harboring putrid smells, so there comes a time when you need to wash them with something other than traditional laundry detergent.

To get Peter Walsh’s full secret recipe for keeping towels spotless and smelling GREAT, be sure to click on Rachael Ray Show’s clip below. With that helpful info, it’s safe to say that we all will have more confidence in hanging those towels. Good to know!

What do you think of this DIY towel cleaning recipe? How do you keep your towels fresh? How often do you wash them? Tell us all about your thoughts and experiences in the comments section below!