Can anyone among us say they haven’t dreamed of being a Disney princess, at least once in his or her life? I think it’s safe to say we all have. If not a prince or princess, every one of us has a fantasy of becoming something, which is most easily attainable through cosplay. Cosplay is taken very seriously in its community, so it’s often considered “weird.” But truly, these costumes are the best way to get transported to another world!

Cosplay costumes are generally very well done. Whether it’s the exact right pieces compiled into a spot-on outfit or an incredible design you made yourself, there are so many amazing costumes to see! None, however, are quite as amazing as this one.

This cosplayer is dressed as Cinderella, the iconic Disney princess, before the ball. For those of us who don’t remember the plot of this classic Disney movie, Cinderella acts as a maid to her evil stepmom and stepsisters. Dressed in rags, Cinderella has been trying desperately to complete her chores so her stepfamily will bring her to the glamorous ball at the castle – but the wicked family has tricked her, and she’s left to cry in her rags as they go off to the ball.

That ragged costume that Cinderella wears is an iconic one – but there’s only one other costume that’s even more iconic. You guessed it, her blue ballgown. It’s unlikely that anyone could see that big, blue dress and not immediately think of Cinderella running off to the ball.

But if this cosplayer (who, by the way, already looks like Cinderella to begin with) is dressed as pre-ball Cinderella, she obviously can’t wear the beautiful ballgown…right? Wrong! The really incredible thing about this extraordinary costume is that it’s actually two costumes in one. 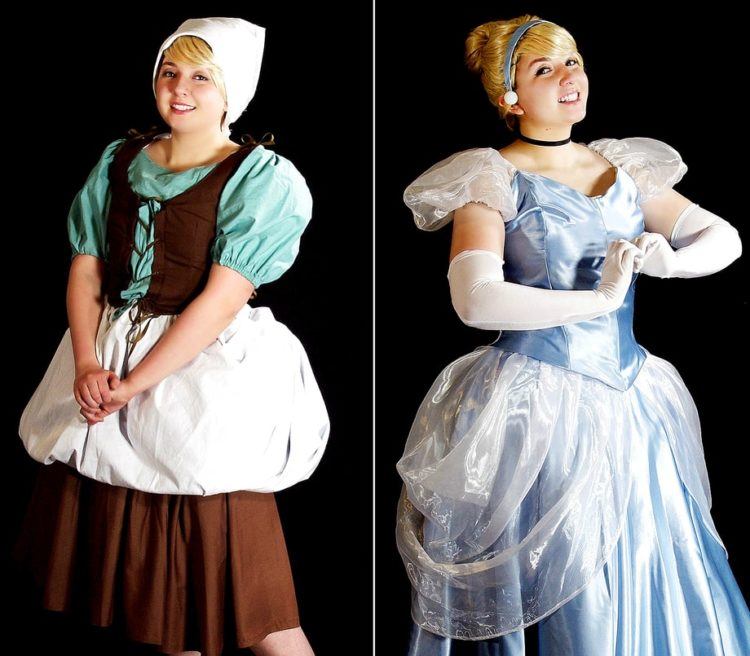 US Weekly
As everybody knows, Cinderella makes her gorgeous transformation with the help of her Fairy Godmother, who appears to magically turn her rags into a sparkling ballgown. While a cosplayer can’t undergo a magical transformation (probably) this design does the next best thing.

She starts by standing there in her ragged costume, unhooking a few snaps under her arms. Then, she beings to twirl, and the dress beings to change. As she spins, she unbuttons a few snaps on her corset, and the iconic blue ballgown falls down from WITHIN the ragged dress. She throws her head back so her white bonnet falls off and reveals a sparkling tiara, completing the outfit.

What a magical transformation! We’re not sure how this dress was designed to hold both costumes, but it was incredibly impressive. Not only were both costumes well-made, but they were made inside of one another, which is just amazing. No costume deserves this transformation more than Cinderella, so we’re glad she decided to make this impressive cosplay a true experience.

What do you think of this extraordinary costume? Has this inspired you for your Halloween costume? Share your thoughts in the comments section below.