Some love the Baby Shark song, and some hate it, but chances are, no matter what your opinion of it is, you likely know every word and can’t help but sing along when it plays.

One family has taken this popular song to a whole new level. They’ve actually incorporated the song into their outdoor Christmas decoration display!

The Hinojosa family is known for their intricate Christmas light display each year. For the last four years, neighbors and surrounding towns look forward to what the family will do, and every year, it just gets bigger and better than ever.

“Last year, we had 60,000 lights, this year it’s 100,000 [lights],” said the homeowner Beto Hinojosa, who lives at140 Shadow Knolls in Boerne, Texas. Coined the “Hinojosa Family Lights,” this year is just as big, with a little added bonus. They’ve put a totally new unique spin on it that no one has ever seen.

Beto is an elementary school principal, so he’s heard Baby Shark once or twice—or a million times before. One of his student’s parents actually gave him the idea to have his display light up to the tune everyone loves to hate. He thought it was brilliant, and honestly, so do we.

Check out a sneak peak of the display!


Besides Baby Shark, the Hinjosa family is also displaying their lights to a few other popular songs in the elementary world, such as the Disney movie ‘Coco,’ The Queen of Tejano, Selena Quintanilla.

So when you come and watch, you’re truly getting an entire show! Bring the whole family, drink some eggnog, and take in all the festive beauty.

The Hinojosa family displays their lights every Sunday through Thursday from 5:30-10 p.m. and on Fridays and Saturdays he extends the time to 11 p.m. Except if it rains—the wet days are the silent days. With that much work put into the lights, he can’t risk them being damaged by rain! 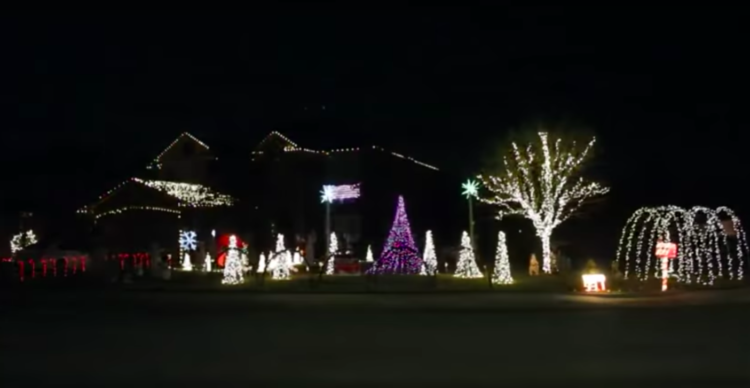 Besides giving their neighborhood a fun show every night, the family also knows what’s truly important this time of year. They offer up a donation box for others to pt in their donations to help gather donations for families in need. Last year, they were able to raise funds for their neighbor’s nonprofit organization called Warrior Chef, which went to veterans and their families.

The secret to the Hinojosa’s immaculate display of lights? The secret is no secret—just hard work by hand: “PVC pipe, rebar, Christmas lights and you can have a show,” Hinojosa said.

If you can’t make the Hinjosa’s show before Christmas Day, not to worry—they extend the time it’s on until January 6, so you have plenty of time to head to Boerne!

And if you can’t make it there at all, you’re in luck. Check out the full display in the video below!