Scientists Discover How Chocolate and Coffee Can Help You Live Longer

Ever have a dream that you’re drinking all the coffee and eating all the chocolate in the world? Oh, and you’re super healthy while doing it? Well that dream just became a reality.

According to a recent study from researchers from the University of Erlangen in Nuremberg and Auburn University in Alabama, regularly consuming chocolate and drinking coffee and tea may cause you to live longer. Say what?

Okay, there’s one catch. The coffee, chocolate, and even tea all must be consumed along with zinc, which, when combined, stimulate a compound that slows down the aging process. It all has to do with polyphenols, which are found in these three foods/drinks. When polyphenols are combined with zinc, that’s when the magic happens.

Turns out that the combination of zinc and coffee, chocolate, or tea (which contain the polyphenols) can protect against what researchers are referring to as “oxidative stress,” a gas that is linked to the aging process. It’s also connected to other not-so-fun things, like diseases and degenerative illnesses. The combination forms a substance referred to in the study as a “mega complex.” And it’s pretty mega cool if you ask us.

This is the first time that researchers have been able to mimic the effects of the enzyme. While there have been a few attempts, researchers were using metals like iron or copper, but this actually caused oxidative stress to increase. Researchers determined that the reason zinc is effective is because it’s less toxic than those other metals. 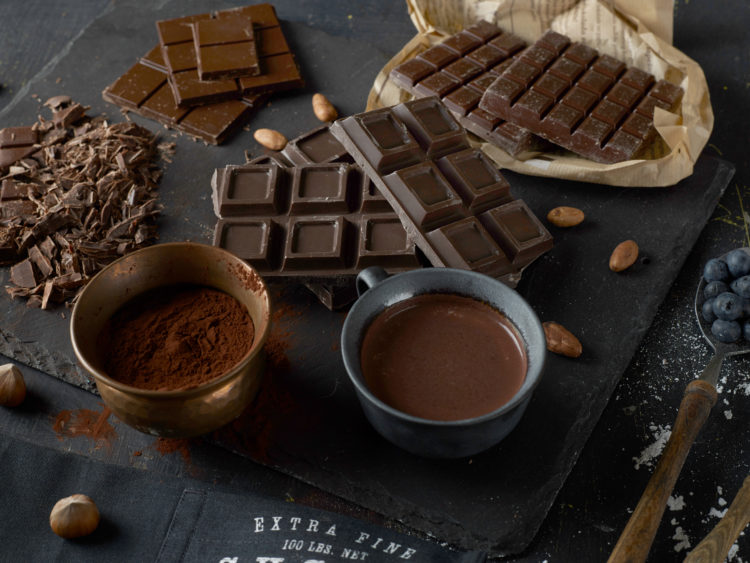 “It is certainly possible wine, coffee, tea or chocolate may well become be available in [the] future with added zinc,” lead author Dr Ivana Ivanović-Burmazović said. One caveat, she notes: “Any alcohol content whatsoever would destroy the positive effects of this combination.”

This isn’t the first time research has shown the health effects of chocolate and caffeine in coffee and tea. A 2018 study by researchers at Loma Linda University Adventist Health Sciences Centre in Southern California found that eating chocolate can help lower stress (not surprisingly).

That particular study noted that darker the chocolate, the better. It’s only dark chocolate that has a “positive impact on cognition, memory, mood, immunity and other beneficial effects,” says Dr. Lee S. Berk, associate dean of research affairs at Loma Linda and lead researcher said.

In terms of coffee, a recent analysis by the National Cancer Institute, National Institutes of Health, and the Feinberg School of medicine at Northwestern University, found that excessive consumption of coffee—we’re talking eight cups a day—could help you live longer on average than those who don’t drink coffee. The study was published in JAMA Internal Medicine.

Coffee has also been proven to reduce your risk of diseases, including cancer, type 2 diabetes, Parkinson’s disease, and heart disease. Additionally, if you suffer liver damage caused by alcohol, drinking two cups of coffee a day might be able to reverse those effects, according to a review of studies.

But enough of that science-y stuff! All you have to know is that chocolate and coffee, arguably two of the best things on this earth, are linked to some amazing health benefits.

Are you a chocolate, coffee, or tea fan? What do you think of this new study?