If anyone could offer insight on the phrase, “don’t let anyone stop you from doing the things you want to do,” it’s AnnCatherine Heigl. Honestly, we think this little lady invented the phrase!

Heigl, who goes by “AC,” is one extraordinary human, and we don’t take that phrase lightly. She stunned everyone around her when she became the first person with an intellectual disability, Down syndrome, to become a collegiate cheerleader.

AC absolutely loves being on her squad, and she’s good at what she does to boot. She’s a flyer, which means she goes up in the air, but she also participates in regular cheering routines with her pompoms during basketball games at her school.

However, it wasn’t quite the easiest journey to get to where AC is today. Many people doubted AC when she said she wanted to be a cheerleader and go to college—even her family.

“To hear her say in one sentence, I’m going to college and when I do so I’m going to be a cheerleader, we thought that wasn’t really possible,” AC’s older sister Lillie said.

That’s not to say they thought she was incapable—that was far from it. AC played tennis at her high school, but always said she hated being in front of crowds, so her family though this might be a similar situation.

Additionally, and perhaps the biggest part of it, is that, as Lillie puts it, AC lives in a world that isn’t made for her. And because of that, she faces a lot of struggles that typical people don’t even have to think about. 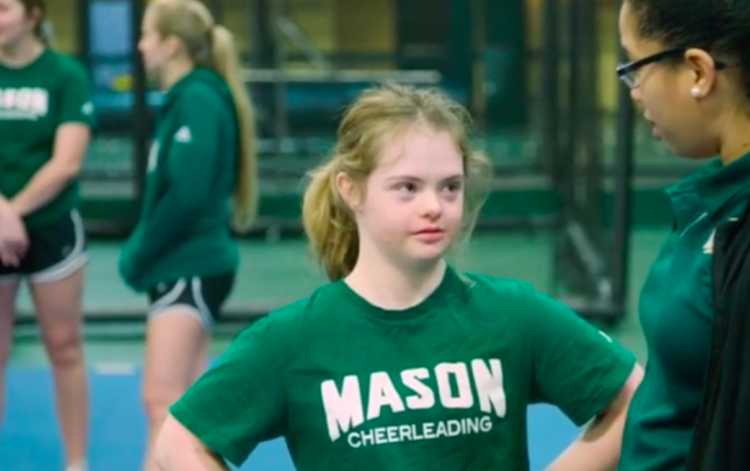 The first time she tried out to be a cheerleader, in fact, the coach at the time basically told her that while she was allowed to try out, she wasn’t going to make it. She could be a “cheer buddy,” but not a true member of the team.

AC’s family of course didn’t take that very well. “My mom had a nice little chat with the coach and explained the circumstances, so AnnCatherine got to try out like everybody else—and she ended up making the squad, like everybody else, because she was good enough,” Lillie said.

Then there was the time AC got denied from a sorority that she tried rushing for, which Lillie thinks was simply because of her disability. “AnnCatherine has an impressive resume,” Lillie said. “She’s done a bunch of volunteer work, she’s a D1 athlete, and I believe if you gave her resume to a typical girl, the typical girl would have gotten a bid.”

However, now that she’s excelled at cheerleading, she’s gained much more confidence, and people have finally been able to put their judgments aside.

“Over the years, more and more of the barriers have gotten knocked down as she’s shown people what she can do,” Lillie said of her sister.

To see for yourself just what AC is capable of, check out the video below.

You can tell that AC’s sister is super proud of her—and we are too! How cool is it that AC is the first ever-collegiate cheerleader with Down syndrome? She’s the definition of “sky’s the limit!”