Mom Set To Change Baby’s Diaper For First Time, Then Spots Something That Will Change Their Lives Forever

We can’t lie, we’re a sucker for proposals. They don’t have to grand or over the top—just as long as the shock factor is there.

Take this heartwarming airport proposal, for example. When the man goes down on one knee, the crowd around them hoots and hollers, when the woman agrees to spend every day of the rest of their lives together.

Or how about this classic but sweet photo booth proposal? These high school sweethearts were just taking photos inside one of these booths when one of them popped the question and their reactions are captured forever.

Then there’s the man who proposed to his own wife for the second time after their home was torn down in a fire. Besides the home, they also lost one of their most prized possessions: the wife’s wedding ring and band (don’t worry he found it—and proposed with it!).

See what we mean? Nothing sweeter than a proposal caught on tape. But why are we telling you all this? Well, it all started with Darick Mead, 26, and Susan Medina, 21, two people who were in love—until one day they were two people in love who got pregnant.

While they weren’t married yet, Darick always knew he wanted to propose to Susan, but he just didn’t know when. “When I found out Susan was pregnant, I didn’t want to ask her to marry me just because we were having a kid,” he explained. “I wanted it to feel good in my heart.” 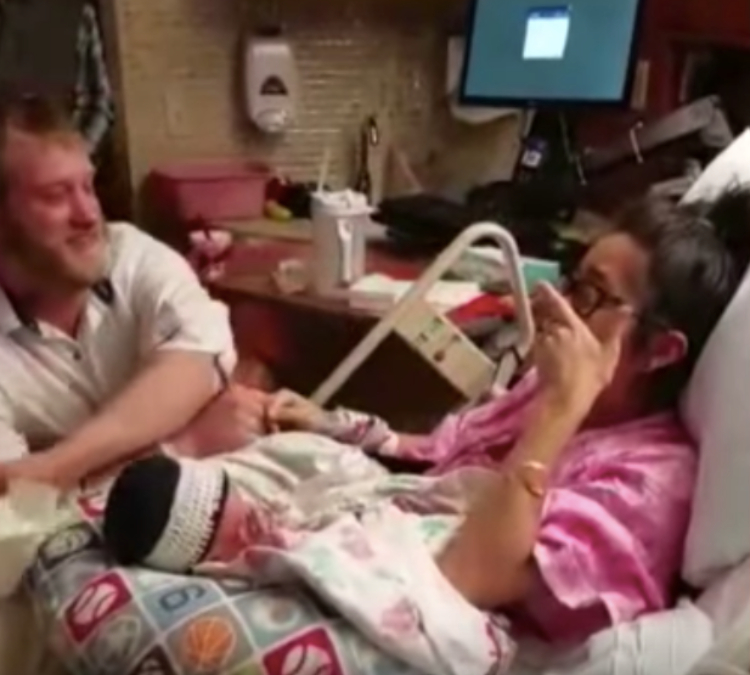 So, like with any proposal, he had to wait until just the right moment. And he knew what that was.

As they spent the next nine months preparing for the birth of their child, Darick was also planning something of his own. And when Susan went into labor, his plan kicked into action.

Susan endured a 17-hour labor, three epidurals and an emergency C-section, so needless to say, she was far from exhausted the day that their son, Ryder, came into the world. She had barely slept a wink when Darick placed the newborn on her chest for a diaper change.

But a number one or number two in that diaper wasn’t all she was going to find! To Susan’s surprise, she noticed her son’s onesie had something written on on it. As she looked closer, she realized it was a question for her: “Mommy, will you marry my daddy?” it read. The engagement ring was also pinned to his onesie.

Susan could barely believe her eyes. Not only did she become a mommy, but she was also about to become a fiancé!

“I wasn’t at all expecting that to happen,” Susan said. “I was super surprised. I still didn’t get to change his diaper that time, but it was really awesome.”

To see how the tear-jerking proposal went down—and to hear Susan’s reaction—check out the video below!

How sweet is this proposal idea? What would you have done if you just gave birth and got proposed to all in the same day?