Things happen. We leave headlights on overnight, we misunderstand instructions, and we forget PIN numbers. Most of us have done at least one of those. What makes it bad is when it happens at the worst possible time.

Making the rounds on the web is a story about one elderly gentleman being stuck in such a situation. Armed with his debit card to make a few purchases at Dollar General, he couldn’t get it to work. He tried and tried but his card kept getting declined.

Standing in line with perfect strangers while this happened had to be anxiety-inducing. And with no other means of payment on him, his tiny moment of forgetfulness was about to deprive him of his purchases. But the customer who was behind him in line was so surprised by what he witnessed he decided to share it on Facebook.

Tim McKellar wrote about how this gentleman’s transaction was handled. After a few unsuccessful attempts, a woman stepped up to help, swiping the man’s card on his behalf. The card still was declined. Then the store clerk decided to intervene.

Cashier Jacob Wittman quietly pulled out his wallet and asked the lady to swipe his card instead, taking care of the man’s purchase! If that wasn’t sweet enough, Tim also shared this:

“The old man wearing his veteran hat was obviously confused and asked the kid if he had just bought his stuff totaling right at $20. Jacob said ‘Yes sir I did and you don’t owe me a dime’.”

Tim was so impressed with Jacob that he asked to snap his picture. His post caught the attention of the small community in Sallisaw, Oklahoma, where folks were able to identify Jacob in the photo. Though Jacob didn’t think his actions were a big deal, local news outlet the Sequoyah County Times got wind of what he did for the Vietnam vet and sat down with him:

“The man is a regular. We’ve talked about his classic El Camino and its antique car tags. That day he came in and said he had just gotten a new bank card. It had a strip on it that said all he had to do to activate it was to use it. He tried using it several times and it wouldn’t work. He was getting confused, so I just used mine. I told him he didn’t owe me a thing.”

He humbly attributed what he did as a way to spread love for his fellow Oklahoman man and humans in general:

“It’s no big deal. It’s just we all need to show a little more love because there are too many people out there who don’t ever see it.”

It is stories like these that remind us that kind acts aren’t so rare, but they can happen when we least expect it. People like Jacob who share the love certainly help the world go ‘round. 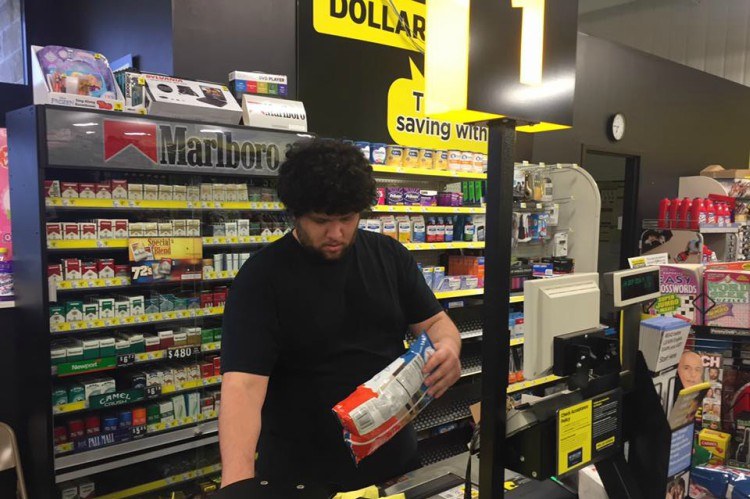 What do you think of Jacob’s act of kindness? Have you ever witnessed anything similar while out shopping? What would you have done if you were in that Dollar General line that day?