Carrie Underwood Got 40-50 Stitches in Her Face in November. What Does She Look Like Now?

Fans of Carrie Underwood may have been keeping up with her whereabouts lately and know she’s been laying low. Much of that has to do with her wanting to keep things private since a fall on the steps at her home left her injured last November.

Though fans were aware of the incident, she didn’t decide to share the story until January by writing a letter to her fan club. In it, Underwood talked about not only breaking her wrist, but injuring her face too:

“It’s crazy how a freak random accident can change your life… in addition to breaking my wrist, I somehow managed to injure my face as well. I’ll spare you the gruesome details, but when I came out of surgery the night of my fall, the doctor told Mike that he had put between 40 and 50 stitches in.”

“I’m still healing and not quite looking the same. I honestly don’t know how things are going to end up but I do know this: I am grateful. I am grateful that it wasn’t much, much worse.

I am determined to make 2018 amazing and I want to share things with you along the way. And when I am ready to get in front of a camera, I want you all to understand why I might look a bit different.”

Here and there, the singer has posted pictures of herself with most or all of her face covered. The insecurity seems to be the reason behind her infrequent social media posts and absence from certain events. In the meantime, media and fans have been in suspense about her appearance.

But now it looks like the tides are changing with Underwood back at work and releasing new music and a video. Earlier this month, she posted a couple of shots of her at band rehearsal and in the studio. In January, she dropped a new single featuring Ludacris called “Champion”, and she’s scheduled to perform at the American Country Music Awards on April 15th. 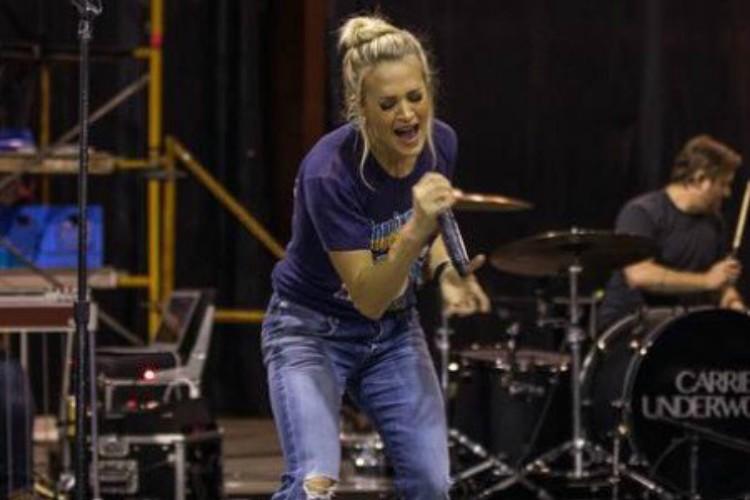 The performance will mark her first major appearance since her fall and everyone will get to hear her sing her new ballad, “Cry Pretty”. While the experience may have impacted her feelings about her face, it certainly hasn’t impacted her work ethic.

In an update posted to her website, Carrie shared how excited she is about fans hearing her new music and her upcoming performance. She’s been hitting the studio hard. She also spoke about her recovery progress, saying that her wrist is almost back at 100% and that her face is “healing pretty nicely”.

That’s good news! What’s even better is that her eager fans will finally get to hear her belt out some new tunes. Click on the video below to check out one of her new songs. If there is one thing that’s at 100%, it’s her powerful voice!

Were you concerned for Carrie Underwood’s appearance? Are you excited to hear her new music and see her perform? Can you relate to how she feels about her facial injury?