Interviewer Asks Harry, Meghan, William and Kate What It’s Like Working Together as Family. Their Reaction Is So Relatable.

We know that the each member of the younger generation of British royalty — Prince William, Princess Kate, Prince Harry, and the soon-to-be Princess Meghan Markle — seems like a truly nice human being. We’ve seen all of them working for inspiring charitable causes around the globe, but also proving that they’re normal people, and in the case of William and Kate, great parents, too

But recently we got our first chance to see all four of them sit down together, which gave a lot of insight on the kind of family they are! At the end of February, William, Kate, Harry and Meghan spoke to an interviewer at the ceremony to kick off Heads Together, a new collaborative charity organization they’re working on.

The interview’s almost half an hour long, so there’s lots of chances to hear — and see — our favorite royals. Our favorite part? At one point in the discussion, the interviewer asked what it’s like to work together as a family. As anyone who’s ever tried to do this knows, mixing work and family can be tricky, to say the least.

Asked if they ever disagree about anything, William jumped in to respond “OH yes….!” It was great to see the normally poised and proper Prince get real for  a second! As you might expect, the good Prince’s response resulted in some giggles on stage. 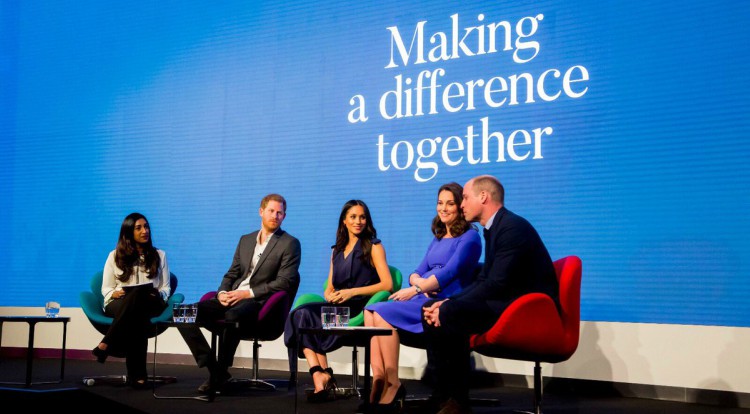 Harry followed up by saying that “working as a family does have its challenges,” then added with a slight smirk “but we’re together for the rest of our lives.” That got a few more chuckles! It just goes to show, once again, that behind all the pomp and circumstance the royals are regular people.

Regular people living extraordinary lives, that is! After the giggles died down, Meghan put things in perspective. The four royals are engaged in many charitable organizations, and the goal of Heads Together is quite literal: they want to put their heads together to find innovative ways of creating positive change. “If everyone is thinking the same way,” Meghan asked, “how are you going to push the envelope?”

Those charitable organizations include some truly inspiring causes, Including Kate’s work with addiction and children’s mental health, Harry’s work with soldiers and veterans as well as African conservation, William’s efforts to fight bullying and homelessness and support environmental causes, and Meghan’s support of women’s and gender equality issues.

By forming Heads Together, William, Kate, Harry and Meghan want to find common threads, like mental health issues, in their various charitable efforts. Their idea is that creating this “umbrella organization” will help the charities have a greater, more widespread impact. “When we work together, we are greater than the sum of our parts,” William said in his speech at the start of the ceremony. What a noble cause indeed!

We hope you’re inspired by the good work that our favorite royals are doing. Make sure to take a peek at the video of the full interview on the Royal Foundation website. There are some real highlights, including Meghan’s hilarious response when the interviewer asks how she juggles her charitable work with preparing for her upcoming wedding to Prince Harry!