These days, school lunches are hot topics, particularly on social media. There have been numerous incidents of children being sent home for packing unhealthy snacks, but there seems to be a more serious phenomenon rising as of late that involves a reality that no child should endure, particularly at school—hunger.

That’s right, there have been reports that kids have been denied school lunches for a variety of reasons, but our story today illustrates just how a school’s lunch policy can affect not only the student, but also their confidants.

Georgia’s Johnny Cook is a man with a big heart. He works as a horse trainer and, before being terminated from Harlason County Middle School, worked a school bus driver.

One day, a student boarded the bus and complained to Cook that he was hungry. When the driver asked the boy why he had not eaten his lunch that day, Cook says that the boy told him that the school wouldn’t give him lunch because he didn’t have the 40 cents to pay for it.

Outraged, Cook vented on social media that night in a Facebook post where he told the story to his family and friends. Included in the text was a plea to those in charge of the school lunch program—he didn’t want to see this happen again. 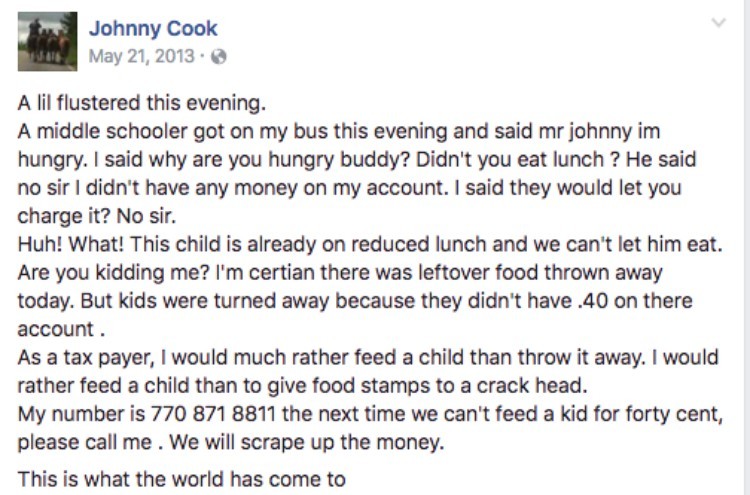 Johnny Cook via Facebook
Incredibly, the post ended up going viral—hundreds of people liked and shared it. Even the head of the school caught wind of it and, by the next day, the bus driver was called into a meeting with the superintendent. There, Cook says that he was forced to make a tough choice—either publicly apologize and say that he had lied about the story, or face termination.

As you probably guessed, Cook chose the second option, effectively getting fired, right there on the spot. But to him, it was a simple choice. He explains, “I felt like, in my heart of hearts, the kid was telling me the truth. Whether he was, whether he wasn’t, I believed him, so I wasn’t going to recant the story.”

Sitting on the other side of this issue is the middle school’s superintendent, Brett Stanton; he claims that this incident never happened and that the school even has incriminating security footage proving that the student in question never even stood in the lunch line that day to retrieve his meal.

And though it seems that he doesn’t fault Cook for showing some sympathy for the kid, he does point out that the bus driver broke the school’s Facebook policy. On top of that, Stanton furthers his argument by explaining that, if the boy didn’t have the money available in his account, he would have been offered a bagged lunch.

Whether you are a ‘for’ or ‘against’ this issue, we think it’s best that you hear both sides of this divisive story. To watch interviews with the bus driver and the superintendent, be sure to click on the video below.

What do you think of Johnny Cook’s reaction to the student’s complaint? Do you agree that these cases should be left off of social media? Have you ever experienced a similar situation? Tell us all about your thoughts and experiences in the comments section below!